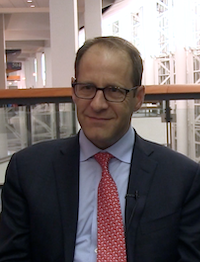 Results from the DECLARE-TIMI 58 trial were presented by Stephen Wiviott, MD, senior investigator of the TIMI Study Group, cardiologist at Brigham and Women’s Hospital, and Associate Professor of Medicine at Harvard Medical School, at the American Heart Association’s Scientific Sessions 2018 in Chicago, IL.

Wiviott told MD Magazine® that the DECLARE-TIMI 58 study included a broader population than many previous studies of SGLT2 inhibitors, with nearly 60% of participants in the primary prevention population. These patients are those with type 2 diabetes who are at risk for, but who don’t already have atherosclerotic cardiovascular disease.

“I think one implication [of the DECLARE results] is that this extends out the benefit to a broader population of patients,” said Wiviott.

However, the trial did not meet the other primary efficacy endpoint of lowering MACE, though it did meet the prespecified noninferiority criterion with regards to MACE, which was the primary safety outcome (upper boundary of the 95% CI <1.3; P <.001 for noninferiority). Rates of MACE were 8.8% in the dapagliflozin group and 9.4% in the placebo group (HR .93; 95% CI .84-1.03; P = .17).


[Transcript has been edited for clarity.]

What were you investigating in the DECLARE-TIMI 58 trial?

So, this was a trial of patients who both had pre-existing cardiovascular disease and patients who had diabetes and who were at risk for cardiovascular disease, so both primary and secondary prevention. We were assessing the safety and efficacy of a drug called dapagliflozin, which is one of the members of the class of SGLT2 inhibitors. So, this was a large randomized clinical trial of dapagliflozin in that population of patients.

What was surprising about the DECLARE-TIMI 58 trial results?

We had 2 different outcomes that we were assessing for as our primary assessment. The first was cardiovascular death and hospitalization for heart failure; the second was a standard that we call MACE outcome, which was myocardial infarction, stroke, and cardiovascular death.

What we did see was a substantial reduction in the cardiovascular death and hospitalization for heart failure. We saw less of an effect on the major adverse cardiovascular events (MACE), but actually looking at that in context, really it isn't a surprising result. In fact, when we look across the members of this class, from a cardiovascular standpoint, it seems like the greatest effect is in reduction of heart failure. The other effects that we're seeing with this class seem to be in the prevention of progression of kidney disease. I think ultimately the trial actually really fits in nicely with the pre-existing studies in this area.

What are the clinical implications of the DECLARE-TIMI 58 results?

Yes, so, I think there's a couple of implications from this study that clinicians should know about. First, this was a broader population of patients than had been studied previously, so this is really the best information we have on patients for primary prevention—those patients who don't already have atherosclerotic heart disease, and so there was a benefit that was consistent in those patients. I think one implication [of the DECLARE results] is that this extends out the benefit to a broader population of patients.

I think the second implication is that there have been some nagging concerns around potential safety events with this class of drugs, particularly related to one trial that showed a slight increase in stroke, one trial showed some increases in lower extremity amputations. So, with this trial we had the opportunity to evaluate those things up front and to have a very careful look at those. Ultimately, we didn't see any difference, so I think the other implication is that these drugs appear to be safe for treatment of diabetes.

So, I would say the overall implication—given that the drugs are relatively safe and there is some broad efficacy—is that we really ought to be thinking about using drugs that are effective in preventing cardiovascular events earlier in therapy.