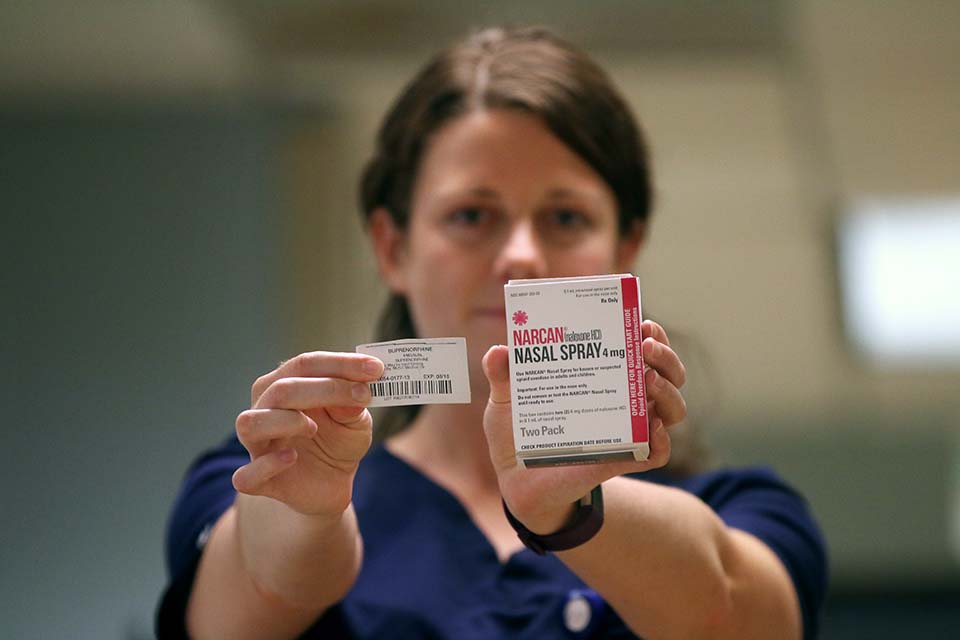 Lindsey Jennings, MD shows the buprenorphine that is used to get patients started on medication-assisted treatment for opioid use disorder and a Narcan nasal spray kit, which is distributed to patients and family members. Photos by Sarah Pack.

Medical University of South Carolina (MUSC) is leading the pilot in conjunction with South Carolina’s Department of Alcohol and Other Drug Abuse Services (DAODAS) through funding from the SC Department of Health and Human Services. The idea is to recreate the research findings of Gail D'Onofrio, MD, chair of the department of emergency medicine at Yale School of Medicine.

In 2015, D’Onofrio published the results of a clinical trial in the Journal of the American Medical Association, which showed that starting patients with opioid use disorder on medication-assisted treatment (MAT) in the emergency department using the drug buprenorphine was more successful than simply referring patients out to treatment. Seventy-eight percent of the buprenorphine group were still in treatment after 30 days, compared to 37% of those who were simply referred to services.

Yet nationwide, the response to the opioid epidemic has been slow to change, in part because of resistance to the idea of treating drug addicts with more drugs. However, MAT has been shown to reduce death rates for those suffering with addiction, and South Carolina is one of the first places to develop a MAT program in the emergency department.

Letters from grateful family members describe the years-long search for a treatment that would work and waning hopes of recovery before stumbling into the pilot program at the MUSC emergency department, for which one woman said she thanks God every day.

“There are people who have replicated these findings in the research setting, but there are not as many who’ve been able to operationalize it in the real world setting, so I think it’s a great accomplishment for us, for our state, to be one of the first to do this successfully,” said Kelly Barth, DO, an associate professor in the Department of Psychiatry and Behavioral Sciences and member of the MUSC-DAODAS team. 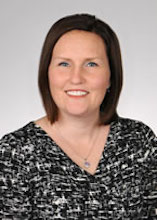 Kelly Barth, DO
After the SC General Assembly provided $1.5 million in 2017 to test the project in 2 emergency departments, the MUSC-DAODAS team, under the joint direction of Sara Goldsby of DAODAS and Kathleen Brady, MD, PhD, vice president of research at MUSC, was able to get it up and running in 3 emergency departments: MUSC in December 2017 and Tidelands Waccamaw Community Hospital and Grand Strand Medical Center, both in Horry County, in March 2018. In this year’s state budget, the legislature ordered a review of the results while also providing the possibility of an additional $2.5 million to expand the program.

Carolyn Bogdon, a board-certified family nurse practitioner who has coordinated the MAT-ED program from the beginning, said the team has been able to overcome the initial fears and stigma associated with the MAT program and has seen some of the biggest skeptics among the staff turn into the biggest advocates. 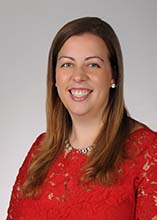 Carolyn Bogdon
“The most exciting part has been being able to change the landscape of treatment in the state of South Carolina and making it on demand, open access, which is not, nationally, the way treatment for the most part works,” she said.

How treatment generally works is that when a person with opioid addiction arrives in the emergency department, whether because of an overdose or complications like cellulitis or endocarditis from IV drug use, the emergency department staff treats the immediate problem and then offers a referral to addiction treatment providers in the community. But even if the patient were to follow up the next day, they generally wouldn’t be able to see a doctor for at least a week and therefore wouldn’t get a prescription right away.

“When people are active in addiction that just doesn’t work. So they just wind up being in a cycle where they can’t get stable enough to follow up with a medical provider,” Barth said.

Now, in the 3 emergency departments that are part of the pilot, every patient is screened for substance abuse or misuse through an in-person interview. Barth said 2,600 patients have been screened so far, 950 of whom screened positive for some type of substance use disorder or misuse. Of those, about 300 were using opioids.

Patient navigators, most of whom are in recovery themselves, then broach the possibility of treatment.

“They’re really able to have a candid conversation with the patient, more so than any health care provider could ever have. We’re constantly ‘should-ing’ the patients: ‘Don’t do this. Don’t do that. You need to do this. You should do this.’ Whereas the patient navigators can say, ‘Listen I’ve been there. I get it. I’ve been literally where you are,’” Bogdon said.

If the patient agrees to treatment, a doctor will dispense a dose of buprenorphine. Buprenorphine is an opioid partial agonist. Its euphoric effect is weaker than heroin, and it also has a ceiling—at a certain point, taking more of the drug won’t increase its effects. 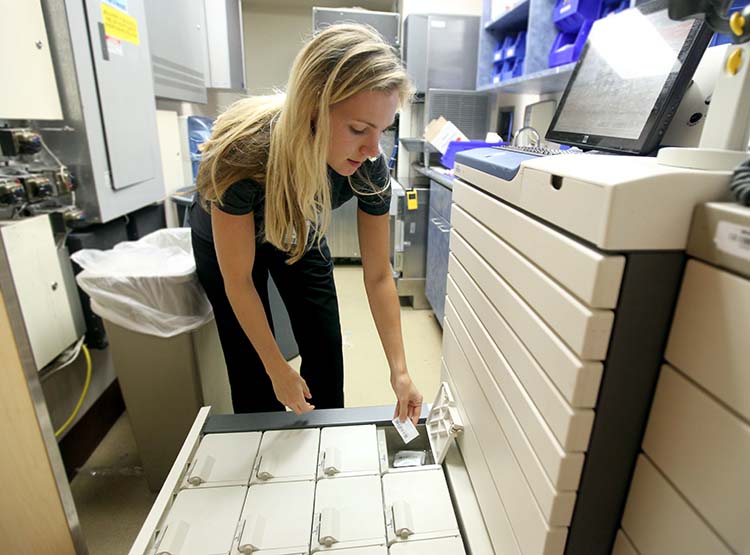 MUSC Clinical Pharmacy specialist Chara Calhoun retrieves a buprenorphine pill that is given to patients who agree to begin medication-assisted treatment in the emergency department.

Part of operationalizing the pilot was ensuring there were enough providers able to prescribe buprenorphine and they wouldn’t be overwhelmed. Charleston Center, the county’s drug and alcohol center, had to adjust its protocols to ensure it would have a prescribing doctor on hand. There are still limitations in the pilot, Barth said. Because fast-track providers are available only Monday through Friday, the emergency department can start people on treatment only Sunday through Thursday.

The pilot program provides funding to ensure those without insurance can still participate. Private insurance will pay for treatment, but providers have been frustrated at the ever-changing regulations, Barth said. “It’s really exasperating for the providers who have agreed to do this and we’re working on decreasing barriers to prescribing MAT,” she said. 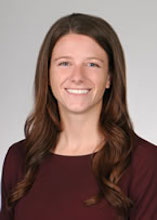 “From a provider perspective, it’s been really great to actually have something to help people, to actually get them started on treatment from the emergency department. Before it would just be the referral, but we never knew, ‘Are the places we’re referring full? Can people actually get in?’ We had no way of knowing that from the emergency department. Building this relationship with addiction sciences and with Charleston Center has been absolutely fantastic for our patients,” Jennings said.

In addition to the buprenorphine treatment, every opioid patient is provided with a Narcan overdose reversal kit, regardless of whether they agree to treatment.

Those in treatment will generally take medication for 6 months to a year, then be re-evaluated, Barth said. Some patients with severe addiction might need to take medication for the rest of their lives, so each individual has to work with their provider to assess the risks and benefits of coming off MAT.

“The medication is just one part of treatment. Medication gets you stable, biologically and physically, but then there are other parts of treatment, just like with any disease,” she said.

Patients with opioid addiction often also have anxiety or depression, and those must be well managed before the patient comes off buprenorphine. Some studies have shown a high risk of relapse when patients stop medication, Barth said.

Providers across the state are taking notice of the program. Bogdon said she regularly fields calls from other hospitals wanting to know what MUSC is doing. Jennings acted as an ambassador to the emergency departments in Horry County, allaying those doctors’ fears. She is also active with the SC College of Emergency Physicians, working to get the word out about the program.

Other doctors at MUSC also have jumped to get on board. Barth said a new, very small pilot program is working with drug users who have been admitted. After the inpatient team saw the success of the emergency department program, she said, they, too, wanted to be able to get patients started on medication-assisted treatment. That pilot program began in June.


This article was originally published by the Medical University of South Carolina.