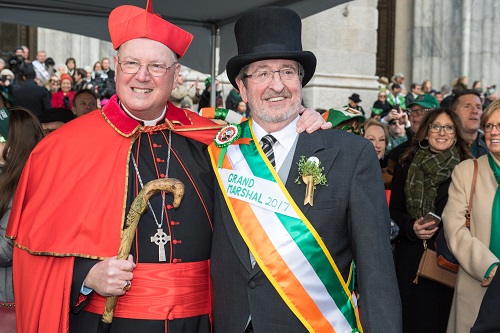 From scratch beginnings – a thatched, mud-walled home with no electricity or running water – Mr. Dowling used education to lift himself up one rung at a time. He earned his undergraduate degree from University College Cork (UCC), Ireland, and after working the docks of the New York waterfront, obtained his master’s degree from Fordham University. Today Mr. Dowling leads New York State’s largest private employer and one of the nation’s biggest health systems.

“It just proves what the United States is all about. No matter how you began, the United States gives opportunities that exist no place else in the world,” Mr. Dowling said during his long walk from 44th Street to 79th. “To be in New York, to be in the United States and to be Irish on a beautiful day like this on St. Patrick’s Day – what could be better?”

Then Mr. Dowling performed his ceremonial duties, leading the parade through a sea of green to Central Park.

About Northwell Health
Northwell Health is New York State’s largest health care provider and private employer, with 21 hospitals and over 550 outpatient facilities. We care for more than two million people annually in the metro New York area and beyond, thanks to philanthropic support from our communities. Our 61,000 employees – 15,000+ nurses and nearly 3,400 physicians, including nearly 2,700 members of Northwell Health Physician Partners – are working to change health care for the better. We’re making breakthroughs in medicine at the Feinstein Institute. We're training the next generation of medical professionals at the visionary Hofstra Northwell School of Medicine and the School of Graduate Nursing and Physician Assistant Studies. And we offer health insurance through CareConnect. For information on our more than 100 medical specialties, visit Northwell.edu.