How Population and Global Resources Are Reaching a Boiling Point 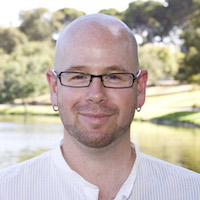 The final image, a spiraling rainbow sphere with an ominous “2017” pasted at the core, tells its own story: this is as bad as it’s ever been, and it can get worse.

In his presentation at the 2018 American Thoracic Society (ATS) International Conference in San Diego, CA, Bradshaw, an author and professor at Flinders University, Adelaide, South Australia, said the current average temperatures being reported now haven’t been prevalent in about 2.5 million years.

The threats of pollution’s effects on global health — from particulate matter and ozone concentration possibly triggering more respiratory hospitalizations, to pediatric asthma rates spiking in areas of greater pollution — have been well-documented over the years. But Bradshaw drew on the characteristics of worsening pollution and global warming rates to explain how the planet is on an accelerating pace to devastation.

The human population rate is “not going anywhere fast,” Bradshaw noted. He explained how accumulating the deaths counted in both World Wars, a fictional 5-year third World War, the Spanish flu pandemic of 1918, an amalgamation of other public health crises, and a global nuclear exchange would still leave estimates for a population of approximately 5 billion people at the end of the century.

In no place population resiliency more prevalent than in Africa, Bradshaw said. The continent will have 5.5-7 times as many residents than its current population size over the next century, growing from 500 million to nearly 3 billion. The rate is the highest of any continent in the world by at least twice the next-greatest increase.

“The fertility decline seen in other places of the world have not been manifested in Africa,” Bradshaw said. “In some countries, they are stable or even increasing.”

Bradshaw explained that population density has become a good predictor of environmental damage — studies have shown that countries that protect more land have a greater environmental footprint.

The results of a recent ranking of countries with the worst environmental damage came as no surprise to Bradshaw, as some of the most densely-population countries ranked near the top (Brazil, United States, China ranked 1-3, respectively). But the other distinguishable factor was country wealth.

Bradshaw explained the theory of the Environmental Kuznets curve — a hypothesis from economist Simon Kuznets that really has no role in environmental metrics as it does modern capitalism.

“The theory is that, as you increase capital prosperity and develop a nation, your environmental damage increases as you begin to exploit more of your resources — followed by some sort of middle class achieving education standards and access to cleaner technologies,” Bradshaw said.

As a result, environmental damage would be reduced by increases in national wealth. But, as indicated in another ATS session focused on wealth and environmental disparity in the US, this is not the reality.

Bradshaw likened the burdens of population growth, wealth disparity, and resource abuse to having a bank account with $1000 in it. If a person earned $20 annually and spent $30 annually, they can survive on the reserve fund’s account for a while before running dry.

“This is the concept of the ecological footprint, which is essentially the amount of environment necessary to support a particular lifestyle,” Bradshaw said.

On average, the human population is “spending” the resources of about 1.6 Earths per year. On its current pace, humanity would overshoot global resource budgets by June 29, 2030. If carbon emissions were reduced by 30%, the overshoot date would be delayed — by only 79 days.

“A lot of people say there’s no evidence the environment is affecting our capacity,” Bradshaw said. “Well, that’s because we’re running down on reserves.”

You May Also be Interested in
Most Popular
Ixekizumab Improves Signs and Symptoms of Psoriatic Arthritis
Experts Advise on Asthma Care, Management during COVID-19
Tanezumab Outperforms Placebo, Tramadol in Improving Chronic Back Pain
Why Is Colchicine So Expensive Now?
New Atrial Fibrillation Guidelines Released