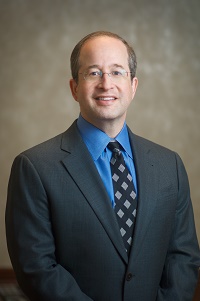 Scott Miller, MD, is a hands-on kind of guy. He began playing guitar at age 9, and while he still considers himself an amateur, he has played in several bands and written his own musical compositions.

“If you play long enough, I think there’s always a desire to write,” Miller says. “I think it’s just the creative side of playing music.”

Miller is on the creative side of medicine as well. He’s the medical director of Northside Hospital’s robotic surgery program in Atlanta, and knew he wanted to be a physician around the same tender age he began learning to play the guitar.

“My older sister suffered from juvenile rheumatoid arthritis,” Miller explains. “So, I would always tag along to the doctors’ offices, and my image of the physician influenced my career choice.”

His focus on urology came later.

“The image that I had of the physician early in my life was really more the internist,” Miller says. “It was kind of my bent, initially, going into medical school. But it became clear that I liked working with my hands. I still liked the detective work of internal medicine, but really enjoyed the hands-on that surgery had to offer.”

A career of firsts
Miller has since carved an impressive career using his hands; a career of firsts, you might say. In 1996 he performed Georgia’s first laparoscopic kidney removal for kidney cancer. That same year he became the first physician in the state to perform a successful reconstruction of the urinary tract via laparoscopy. And 4 years later completed the state’s first laparoscopic prostate removal without robotic assistance.

But Miller keeps it all in perspective.

“In looking back, it’s very satisfying that we were able to bring this technology to Georgia,” he says. “But at the time, I was just trying to find a better way. We didn’t have the technology that we have today, and we certainly didn’t have the knowledge.”

That desire to “find a better way” and to perfect techniques was the impetus behind the transition into robotic surgery. Laparoscopy, Miller explains, was a precursor to robotics, because robotics is a type of laparoscopic surgery. And when robotics came to Atlanta, initially for use in cardiac surgery, it caught his attention as another tool to facilitate some of the laparoscopic procedures he performed.

“In some ways it was a natural transition,” Miller says. “But in other ways, because of being used to the laparoscopy, it was like relearning things again.”

Learning and teaching
Miller learned well, and now he passes that knowledge on to other surgeons across town and around the globe. He says he enjoys figuring out how other people think. And a good teacher will work with the material and see it through students’ eyes, whether that’s a patient, support staff or another physician. In other words, a good teacher sees it from the student’s perspective.

“I love teaching,” he says. “I enjoy that challenge. And I think that’s why physicians are, and should be, teachers.”

Miller has built a successful career seeing things through others’ eyes. In 2005 he developed the SPECIAL (Sequential Pre-emptive Exposure of Cavernosal Intervention with Atraumatic Ligation) surgical technique for preserving nerve function after prostate removal, which improves post-operative erectile function.

“It was done more out of need,” says Miller of the surgical technique. “The challenge of sparing these nerves that are responsible mainly for erectile function, during a prostate removal, is that they’re located adjacent to the blood supply for the prostate. You have to be able to control that bleeding, or prevent that bleeding. Yet, you don’t want to control the nerves, because you’ll damage those nerves.”

Miller was faced with the challenge of answering the question of how to reliably determine where the blood vessels stop and the nerve tissues begin.

“I racked my brain over that, and finally realized that you cannot consistently make that prediction,” he says. “There are no anatomical markers, there’s no instrument or technique that we can use to make that determination reliably on this variable anatomy that we see around the prostate.”

What do you do when you have a question for which you can’t determine an answer? According to Miller, you come up with a different question. In this case, the revised question was: How can we do the procedure without knowing that information? Once he changed the question, the light bulb came on.

Not only does the technique protect the essential nerve bundles, but also the surrounding neural structures and supporting tissues prone to injury from the slightest manipulation. It also results in more satisfied patients.

Staying in tune
When he’s not thinking outside the box to develop new or fine tune existing surgical procedures, Miller and his guitar join with other business professionals about once a month to perform at various non-profit events and parties. He says doing so provides benefits on 2 levels.

“When I play with my band mates and come back that evening, I feel like I’m totally rejuvenated; totally refueled,” he explains. “The stress is totally gone. I’m ready to start over. And even on a smaller scale, if it’s very busy, just picking up the guitar for 10 minutes at a time is a stress reliever.”

The secondary benefit brings him full circle back to his surgical career.

“It’s a way of maintaining my dexterity, my fine motor skills,” he says. “And I’m always trying to push myself to learn something a little different. Even if it’s something subtle, just to make that part of my brain work.”

That’s both satisfying and rewarding. But Miller says there’s nothing more rewarding than hearing a patient say, “Thank you” for what he was able to do for them.

“It’s a privilege to be entrust with something that’s so important to them,” he says. “There is no feeling that can replace that.”

You May Also be Interested in
Most Popular
Gulf War Mystery: Why Is MS Onset Slower in Gulf Vets?
The Fear of the Coronavirus, and the Reality of the Flu
Fluoxetine Reduces Symptoms for Children with Autism Spectrum Disorders
New Immunotherapy Blocks Key Macrophage Checkpoint in AML Care
Top 10 Painkillers in the US