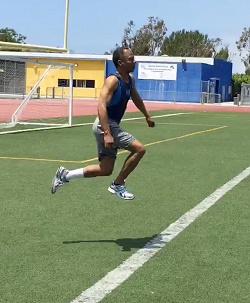 William Long, MD, didn’t realize it at the time, but his journey to becoming a prominent orthopedic surgeon began at age 7 when his father lost the ability to walk and was confined to a wheelchair.

“I found orthopedics because I’ve been trying to get him to walk again since I was 7,” Long explains. “And in orthopedic joint replacement, you can take people who can’t walk, and after you do your work, they can walk again.”

But it was also Long’s love of life and all living things that propelled him into the field of medicine.

“Ever since I was a very young child I loved living things,” he recalls. “So I decided I was going to go to college and learn about living things. Then I’d figure out how to make a living from that afterward.”

And on that latter point, Long has done very well.

While Long has built a successful career enabling others to make better, fuller use of their legs, he’s used his own set of wheels to excel in track and field. Not surprisingly, his father was a major influence in that regard as well.

“He was a scholarship athlete at Ohio State in 1928,” says Long of his father. “I wanted to be great in track because he was great in track.”

Long succeeded. During his senior year at Serra High School in Gardena, CA, Long wrote in the yearbook that he planned to attend college on a track scholarship, major in medicine, and become an orthopedic surgeon. That proved prophetic.

He was recruited by then-US Olympic Track Coach Donald Chu to run at California State University, Hayward. But since the school did not offer track scholarships, Long worked his way through school while training for the 100-, 200- and 400-meter long jump.

“To me, track represents the belief that you can set your mind to something and, with just your body, your imagination and desire, make yourself great or transform yourself into a great athlete,” Long says. “And track is fair. If you jump the farthest or run the fastest, you win. There are no referees that show favoritism.”

But sometimes life isn’t fair. Unable to take a year off from medical school to train for a chance to make the 1984 US Olympic team, Long decided to stay in medical school and train for the long jump at the same time.

“I didn’t know what the limits are for a human,” he admits. “What I tried to do was train between 10 p.m. and midnight. I thought I could do it all.”

Instead he caught pneumonia, and had to make the difficult decision to step away from track competition.

“Physically, my body just broke down.”

The old saying is that you can’t keep a good man down, and that was certainly the case with Long. He had already completed his orthopedic surgery training, including joint replacement fellowships at Kerlan-Jobe Orthopaedic Clinic in Los Angeles, but felt something was missing in his life. So, at age 35 he entered local open and invitational track meets and defeated some of the top collegiate long jumpers.

“It’s actually a huge accomplishment, because there are great athletes that ran in the Olympics, broke world records, and I can compete against them,” Long says. “And how many times in a lifetime can you be a world champion in anything?”

He says the hardships he faced earlier in life help him to this day.

“I think that part of my life helped me understand that you still can dream big, but sometimes you have to choose,” he explains. “You can’t have it all. You can’t do everything. That was the lesson.”

Long says that his pursuit of excellence and competition in track and field has translated into providing better care for his patients. He believes everything he has experienced in life has positioned him for the work he does as an orthopedic surgeon. And it starts, he says, with knowing his patients.

“I listen and make sure we know their goals or their dreams,” Long explains. “They may say, ‘Well, I want to walk again. I’d love to be able to go to Europe and take my wife for a walk on those cobblestone roads.’ So we start with the dream—the patient’s dream. Not my dream of a perfect surgery. Their dream of what they really want to do with their legs once they’re restored.”

Coaching comes next. Long says that if he believes that a patient’s legs are going to be straight again, then like a coach, he conveys that feeling to the patient. And when the patient recognizes that the surgeon believes it, then they start to believe it too.

“That’s the art,” Long says. “You know, the art is one person or the doctor has this image and he gets everyone to believe in it and everyone to participate. That’s the art of medicine. If you do that, it’s very powerful.”

As for the long jump, Long says that he’d like to win one more World Championship. But, he knows that Father Time is undefeated.

“I’m already on borrowed time,” Long says, laughing. “At 56, you know, that’s a very violent event. You sprint, you hit maximum speed, and then you go from horizontal to vertical, and in one step you try to convert your energy. But, I’d like to keep doing it as long as I can still breathe.”

You May Also be Interested in
Most Popular
New Data Suggest Enzyme Blockage Could Fight HD
HIV: Software Finds 25% Patients in Washington, DC Not Achieving Viral Suppression
Top 10 Painkillers in the US
Antipsychotic Use Increases Fall Risk for Alzheimer Patients
Hematologists Dubbed Pivotal in Finding and Treating Gaucher Disease Type 1