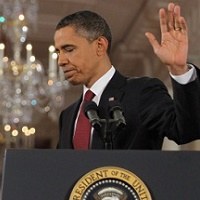 In an op-ed published Tuesday in The Hill, Jay A. Perman, MD, president of the University of Maryland, Baltimore, said the money is needed immediately.

“We’re at a critical moment,” Perman wrote. “The US must invest in the science, training, logistics, facilities, and equipment that will contain and ultimately end Ebola in West Africa, and stop its spread to developing and developed nations.”

The University of Maryland is currently conducting a phase one trial of NIAID/GSK vaccine in Mali and Baltimore, Perman noted. He said development of the vaccine is one key effort, and would be helped by Obama’s funding request.

The spending bill now heads to the Senate, where it is expected to be approved within the next few days. Though the amount of Ebola funding is less than Obama requested, White House Press Secretary Josh Earnest said the president supports the spending plan as an acceptable compromise.

It’s not yet clear exactly how the $5.4 billion will be split up. However, the initial $6.2 billion plan called for about half of the money to the United States Agency for International Development to train healthcare workers and burial teams in West Africa. Another $2.4 billion was slated to go to the US Department of Health and Human Services to train domestic healthcare workers.

Although Obama received most of his Ebola funding, Politico reported Monday that the National Institutes of Health would receive a budget bump of just $150 million. With a core budget of nearly $30 billion, Politico said that number won’t even keep up with inflation.

You May Also be Interested in
Most Popular
Katie Marks-Cogan, MD: Setting a Pediatric Food Allergy Prevention Strategy
Pharmacogenomics-guided Antidepressants May Still Miss Mark
Microbiome Markers Linked to Quality of Life for Women with IBS
Meaningful Use of EHR Does Not Certify Improved Care Quality
Low Likelihood of Adverse Cardiovascular Events Seen in Today's Survivors of Kawasaki Disease