Physician Performs Magic In and Out of His Practice 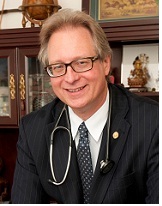 The audience at the Magic Castle in Hollywood watches as water appears to hang in midair; seemingly suspended on nothing as it hovers over an unwitting volunteer. And when the water suddenly slashes down over the volunteer, the audience roars with laughter at the apparent sloppiness of the magician.

Little do they know that to the magician, board-certified internist John de Beixedon, MD, it’s really a calculated sloppiness.

“Magicians spend a lot of time working on card tricks to make them look perfect, but I realized that if you do a magic trick that’s sloppy, but then it comes out perfect, people are even more amazed, because it doesn’t make sense,” de Beixedon says. “If you drop cards, they figure well, the cards fell down, so there’s no way … wait, how did that happen. So it adds an extra layer onto the illusion.”

But away from the stage, there’s nothing illusory about the work that de Beixedon does. A specialist in diabetes and, more recently, bariatrics, the principal of the Pasadena Center for Medical Weight Loss is as dedicated as they come to the work he does and the health of his patients.

It started with zoology
In 1984, de Beixedon received a B.S. in zoology from Duke University. Zoology?

“At that time, Duke University required eight credits of botany, like eight separate botany courses,” de Beixedon recalls. “So not only did I have to do eight courses in zoology, I had to do eight courses in botany. So almost nobody did a biology major because there would be no time for anything except that major. And since I was planning on going to medical school, it was one of the degrees at Duke that was typical for a medical student, because the zoology requirements fulfilled the requirements for pre-med.”

Zoology hasn’t played a major role in de Beixedon’s career, but it has provided him with a multitude of interesting tidbits where animal behavior is concerned; the type of trivia that makes for interesting conversations.

“It’s like, what not to do if you ever meet a gorilla,” he laughs. “It’s quite humorous … but there are specific things that if you do them, they will literally enrage the gorilla, and otherwise they won’t be angry at all.”

What did influence de Beixedon was an opportunity while in high school to work with Jean-Pierre Hallet, a Belgian ethnologist, naturalist and humanitarian who was best known for his extensive work with the Efe pygmies. It was that exposure that prompted de Beixedon to pursue tropical medicine and attend medical school in a tropical environment. That plan, however, quickly went up in smoke.

“After working with Hallet for a number of years, just around the time that I was planning on going to Zaire, because there was a clinic there, the Rwanda and Burundi revolution occurred and the clinic was basically destroyed,” de Beixedon says. “So, I never got to practice medicine in Zaire.”

Focusing internally
Instead, de Beixedon decided during medical school that internal medicine would be a good fit. He refers to the field as a “specialty of the skin and everything inside of it. Literally, it’s the whole human, and you need to have a tremendous amount of knowledge of all subjects.”

Following his residency, de Beixedon spent two years working for what he calls a “pure HMO” providing “the McDonald’s version of medicine for the elderly.” He left to join a private practice in Pasadena that, at the time, was 90% PPO, but within five years shifted to 90% HMO.

His concierge-style medical practice, he says, allows him to combine the time that doctors had in the 1970s with the technology of today into a more effective, pleasurable form of medicine. He sees more than the eight to 12 patients an internist in the ’70s would have seen, but less than the 30 to 35 patients internists see today.

“I probably, if I’d been truly wise, would have just gone to concierge, but I decided to give patients a choice, and some of them said yes, they did want closer attention, longer visit times, greater ability to get in touch with me,” de Beixedon says. “There are people who really value that. It really has allowed me to continue having an office because of declining reimbursements at the same time costs have increased, making it hard for private practitioners to exist.”

Magical rewards
Like many children, de Beixedon became interested in magic around age 9. He focused on a comedic style of magic because “it was more fun to make the magic work to a point, and then not work.” But he also relished the genre’s flexibility to pretty much say or do anything and still not offend people.

“Magicians of today are the last vestiges of the fools of old,” de Beixedon says. “The fool was the guy who could tell the king he was fat and still not lose his head. And everybody would laugh at the fat king, and the king would laugh along with him. And just like that, in magic you can say and do things that you can’t do in ordinary life; and within the guise of a magic show or entertainment, people get a kick out of it. So that is definitely an element of freedom; not only to be able to entertain people, but to entertain them in a way that they won’t find anywhere else.”

And de Beixedon takes great satisfaction in the medical magic he’s able to perform with his patients.

“Knowing that you’ve made a difference in somebody’s life is a wonderful feeling,” he says. “I’ve taken 112 pounds off a lady and seen her go from a woman who could barely walk 50 feet to someone who could hike for three or four miles without getting winded. And that’s a great feeling, to see people transform.”

Ed Rabinowitz recently wrote One More Dance, a book about one family's courageous battle against time and glioblastoma brain cancer. Read more about the book here.

You May Also be Interested in
Most Popular
When to Suspect Diarrhea is Symptom of a Clostridium Difficile
FDA Clears Embrace Epilepsy Smartband for Pediatric Use
Off-Label DOAC Use Not Appropriate for LV Thrombi, Increases Stroke Risk
Heart Failure Patients Could Benefit from Palliative Care
High-Potency Cannabis Linked to Poor Mental Health