Helping Trainees Get Along With Each Other 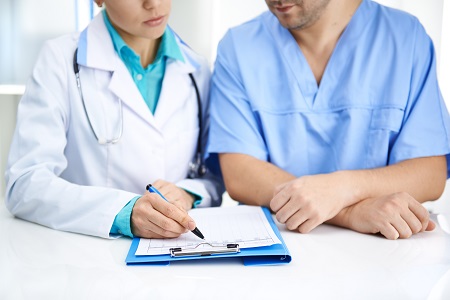 Supervising medical students and residents can be an enriching and satisfying part of a physician’s job. These teaching roles are typically not highly compensated, especially in clinic or on the wards. And if problematic issues pop up, they can be huge time and money wasters for you as an attending physician, potentially making you second-guess why you signed up for teaching duties in the first place.

One of the biggest challenges that can arise when you supervise physicians-in-training lies in dealing with their interpersonal conflicts. You may recall competitiveness from your own early years when you worked closely with ambitious and stressed out peers. But even though peer conflicts often occur during medical education and training, it is possible to help students and residents thrive and avoid unhealthy competitiveness.

Your guidance can refocus the hostility that often burdens physicians-in-training. As a proctoring physician, you can have a stabilizing effect on the students and residents who you teach, creating an environment of cooperation that they can model in their future careers.

You are likely to sense insecurity in some of your trainees. And most doctors-in-training need some reassurance. In fact, even those who may act arrogant are often unsure of their own competence. When they make a mistake, it’s important to take the opportunity to privately correct them even if you later end up teaching the whole group about the relevant medical decision making process.

Shaming and humiliation can make an emerging physician feel helpless. And they may feel they the only way to restore their reputation in the eyes of their peers is by making someone else look bad. This can lead to a cycle of backstabbing and lying, as a resident or student who feels ashamed may desperately try to hide their own mistakes and sabotage others. The end result is an environment where no one can be trusted. And if patient care is at stake—outcomes can be affected.

As an authority figure, it’s important to balance the demands of strong, solid work expectations with goals that are clear and realistically attainable at their level.

When students and residents hear extreme statements about others, they can anticipate that they will also be evaluated in extremes. For example, when doctors in another department are described as “constantly rude” or “never on time” or “always the best” or “chronically lazy”, it can make trainees unnecessarily guarded about their own behavior.

Of course extremes rarely exist, and it’s unlikely that the doctors described are truly “the worst” or “the best,” but it is all too common to overstate things this way.
When trainees fear that they will be similarly placed on a highly polarized linear scale, they will turn against each other to try to avoid being on the less competent end of the scale. But if they learn that most situations and outcomes—good or bad—are actually pretty typical, they are less likely to try to be invisible, act defensive, or to be on the offense.

When everyone feels that they have to impress you, they may all run themselves ragged trying to do the same exact thing—each one trying to race back with impressive results before the others. Showing off by being the first to rattle off all of the genetic mutations associated with a rare disease can make them look smart, but it isn’t necessarily useful if it doesn’t fit into the whole patient care plan.

As the supervising physician, you can set the tone by explaining your priorities. Your students and residents may need to hear the value of teamwork directly from you, especially if they have been in a negative setting before. For example, you can tell your trainees that you want them to focus on patient outcomes and that you want to see each member of the team working together to reach a common goal. They can benefit from hearing that patient care is often bigger than the achievement of just one doctor (and that it involves non physician providers too) so they can understand that the role that one provider plays in a patient’s health inevitably impacts the successful outcome of the next provider who cares for that patient.

Nicknames and labels may seem like fun, but they can be frustrating. A person who is designated as a slacker, cutthroat, hyper, sleepy, or a weasel can be seen that way even at times when he or she doesn’t demonstrate that type of behavior.

It’s an easy shortcut to label people based on a few interactions, but the vast majority of the time, such pigeonholing trademarks do not represent the way a person acts most of the time. Try to notice when your trainees are stamped with a categorization that can harm their reputation, and take the initiative to put an end to it.


Start fresh with each new team

We can’t help but look at people who remind us of someone and internally respond by preemptively attributing certain characteristics to them. But a student or a resident who has an obvious feature similar to that of someone else—the same ethnicity, fellowship goals, hometown, or hobby—does not necessarily have anything else in common. So it can be easy to fall into a trap of assuming that a person will act a in a preconceived way. And this can rub off on other trainees and affect how they interact with each other. Allowing a fresh start can be good for you and for the team.

Being a teaching physician is rewarding in many ways. But it can cost you time and money when students and/or residents don’t get along. Helping budding physicians learn how to get along with each other—despite the long hours, stress, and the personal idiosyncrasies that emerge in their day to day interactions—is among the most important roles of a facilitating attending physician.

You May Also be Interested in
Most Popular
Inadequate Health Literacy Could Spell Disaster for Heart Failure Patients
Anne Fung, MD: Phase 3 ARCHWAY Top Line Results
The Fear of the Coronavirus, and the Reality of the Flu
FDA Approves Voltaren Arthritis Pain as OTC Topical Gel for Osteoarthritis
The Optimal LDL Level