This is the Endowment Effect, a cognitive bias by which we value something we own more than an equivalent item which belongs to someone else. Though this is irrational, it plays out daily in decisions.

For example, if we possess a piece of chocolate cake, we might sell it for $6.00. But, if we were buying it from someone else, that $6.00 would be too high for us to fork out. Then, we might consider paying $4.00 or less. 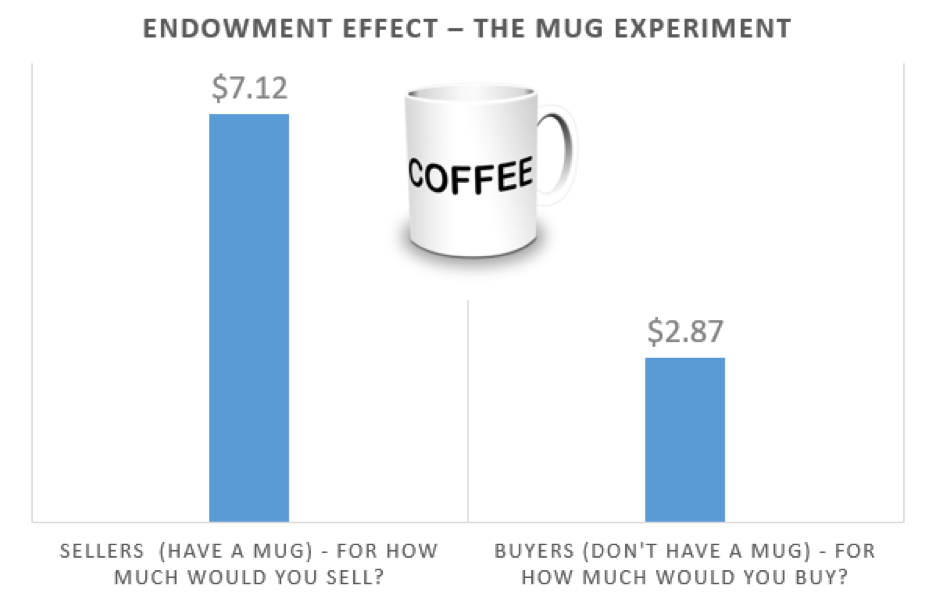 From “Endowment Effect: A Guide to The Emotional Trigger That Influences Your Customers’ Minds,” by Tomer Hochma.

In the experiment, participants were given objects of similar value to one another which were used for exchange. Some received a chocolate bar which was equivalent in price to a cup given to the others. Those with the cup were reluctant to exchange it for the chocolate bar and vice versa, which indicates that we value what we own more than what we don’t.

This kind of irrational behavior applies to other financial situations as well.

For example, let’s say Doctor A owns a colonial home. If Doctor A were to sell it, she would expect a higher price than if she were to buy a nearly identical house on the open market because the doctor is partial toward what she owns.

Although economists originally hypothesized that the endowment effect occurred because humans are loss-averse, new evidence suggests there is an additional reason under specific circumstances. We identify with something that is ours.

Sara Loughran Dommer and Vanitha Swaminathan's 2012 experiment demonstrates the point. Dommer is assistant professor of marketing at the College of Management, Georgia Institute of Technology in Atlanta, and Swaminathan is on the faculty of the University of Pittsburgh.

The two asked undergraduate students to role-play regarding a ballpoint pen transaction. Those designated as sellers were given pens and asked if they wished to keep the pen or sell it for a cash amount — between $0.25 and $10.00. Those selected as buyers were asked to decide if they wanted the pen or a cash amount in the same range.

Before the experiment began, some of the undergraduates were asked to imagine a past relationship when they felt unloved and write down their feelings related to it. The others were requested to write about an average day.

Students sellers who contemplated rejection valued their pens more than those who did not. The authors concluded, "After a social self-threat, individuals likely have strong possession-self links because possessions can enhance the self and help individuals cope with the threat."

Dommer and Swaminathan did not discard loss-aversion as a reason for the endowment effect, but they did suggest that their ownership hypothesis is another explanation. Indeed, the emotion behind financial decisions is complicated!

You May Also be Interested in
Most Popular
Janssen Files sNDA for Canagliflozin for Cardiovascular Risk Reduction
35% of Healthcare Reviews Fail to Report Side Effects
Top 10 Painkillers in the US
Certified Nurse-Midwives Improve Pregnancy Outcomes
Adam B. Hill, MD: Improving Public Mental Health Care