How Global Tumult Can Help US Markets

JUNE 19, 2019
Dave Gilreath, CFP
Sometimes, what most people think is good for markets isn’t, and what they think is bad for them is actually good.

A domestic example lies in the recent figures on consumer sentiment, showing the highest levels in 15 years. This is the kind of statistic that tends to prompt market optimism. This is curious because upward domestic markets historically haven’t always followed upward consumer sentiment.

Financial media sometimes gets investors all worked up about the presumed benefits of consumer optimism to the stock market. Yet, contrary to popular belief, higher consumer sentiment is, by some measures, linked with poor market performance. Low consumer confidence has historically preceded higher stock market returns, making it a contrarian indicator. 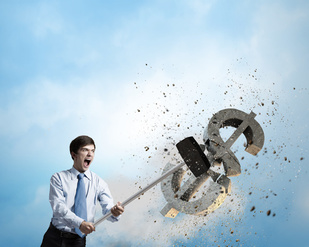 However, anyone predicting a strong domestic stock market over the next year or two will probably end up being right--for reasons having nothing to do with consumer sentiment.

This potential opportunity is largely because of a global scenario that may seem negative for US markets in the short run but might actually help them long term. People are worried about the impact of the tariff war with China on the U.S. economy (and hence the markets) but in the scheme of things, this disruption’s impact on China can actually benefit American stocks. As well as, the current political instability in Europe. This global tumult will mean that foreign money will continue to pour into US markets because it doesn’t have a better place to go.

A closer look at underlying causes of the tariff war with China—which has underlying issues that generally have bipartisan consensus, so the election won’t completely change the US position—reveals it’s really not so much about trade as it’s about national security. At its core is Huawei, the Chinese mobile phone manufacturer that, American intelligence agencies suspects, engineers phones to eavesdrop on users. Following this determination was a federal ban on importing these phones, throwing a monkey-wrench into Huawei’s plans for market dominance in the coming 5G wireless era. By enacting this ban, the U.S. is indirectly disrupting a key part of China’s global trade plans as they involve 5G and Huawei in a big way.

Trade squabbles are a way that China is retaliating, and tariffs have become the US government’s counter-weapon in this trans-Pacific tit-for-tat match. Generally, trade with China has a much smaller impact on our economy than most investors think. The impact of the day-to-day volleys in the tariff war on US markets would be less impactful if more people were aware how little we sell to China: annually, about $200 billion worth—less than one percent of our total economy. Yet some keen observers believe that China wants the trade war because it could provide a convenient opportunity to devalue its currency, a move that would ease the pressure of the nation’s massive debt overhang.

China’s massive debt could eventually bring a deep recession to the world’s second-largest economy. This aside, there are other reasons to doubt its long-term prosperity. Decades of meteoric growth have brought a higher standard of living and increased wages, resulting in higher costs for manufacturing goods for Americans. These higher costs are already sending this manufacturing to poorer places, such as India, now the world’s fifth largest economy, with a population that is nearly as great as China’s.

India is the world’s largest democracy--a positive growth factor, in contrast with China, whose Communism surveillance and oppression of individuals and limitations on personal freedom (get a jaywalking ticket there, and you literally lose freedom points) is viewed by some experts as likely to increasingly stifle worker spirit; capitalism flourishes best in democracies. In addition, China has increasing global trust issues stemming from systematic and government-sanctions copyright violations. All these factors point to a tapering of the global dominance of the world’s second-largest economy and decreasingly attractive markets there.

Europe also has its troubles. The pro-populist outcomes of recent elections have weakened pro-European Union parties, creating doubt about the union’s stability and the health of European markets. The United Kingdom is in disarray over Brexit and no matter how they exit the European Union, the likely impact on its economy will be profoundly negative. Further, with the exit of Chancellor Angela Merkel, the future of Germany’s economy comes into question, and France is also rife with social divisions. So, there are serious troubles affecting economies and markets in the world’s seventh, fourth and sixth largest economies, respectively.

Meanwhile, bond rates have been declining in Japan (the third largest economy) and actually inverting in Europe (where bond investors actually pay companies to lend them money), making the rates of bonds from domestic issuers attractive and the US stock market even more favorable by comparison. Foreign investment money keeps coming here, so US markets keep chugging along.

There are those who worry about the end of a record business cycle—as though there were any significant data pointing to this (there isn’t) or there was some kind of time limit on expansion (there isn’t). But the factors we do know about all point to market growth. Not that this upward ride will be steady. The market will likely remain choppy throughout the summer, which can create buying opportunities for the faithful.

The reigning perception is that many of these dips are being caused by trade tensions and indeed, the two coincide. But the real reason for the dips is that uncertainty amid a tariff war is suppressing corporate growth—temporarily. Companies can’t make expansion plans when they don’t know what the trade rules will be. So, they’re hoarding their expansion cash. When the trade tensions ease, this pent-up expansion demand will likely let loose, driving the market even more.

But even without this, 2019 estimates forecasts call for good earnings, and stock values tend to march in lockstep with earnings. This growth should continue, however haltingly, for the next year or two. Along the way, I believe the Dow Jones Industrial Average could reach 30,000 sometime in 2020.

For more personal finance tips and insights, read on here!

David Sheaff Gilreath, CFP® a 36-year veteran of the financial service industry, established Sheaff Brock Investment Advisors LLC, a portfolio management company based in Indianapolis, with partner Ron Brock in 2001. The firm has more than $1 billion under management.

You May Also be Interested in
Most Popular
Cancer Survival Complicates Chronic Pain Management
Secukinumab Reduces Spinal Pain for Axial Spondyloarthritis
Top 10 Painkillers in the US
Flu Cases Near 30 Million in the US, CDC Reports
Belimumab Safe and Effective Treating Systemic Lupus Erythematosus