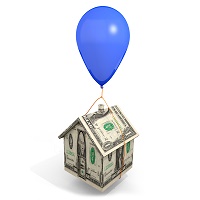 I’m looking into refinancing my student loans. Should I choose a variable or a fixed rate loan?

There is a natural hesitancy to having a variable rate loan, because it creates uncertainty in the future. However, it is still often the correct choice in many situations. The real question is not “variable vs. fixed” but rather “variable vs. variable plus an insurance policy.” When you take a fixed interest rate loan, you are essentially paying the lender to run the interest rate risk for you. You are insuring against a rise in interest rates. My general philosophy with insurance is to insure well against financial catastrophes, but to avoid purchasing insurance you do not need because, on average, insurance is a losing proposition. It must be for the insurer to generate a profit from its efforts.

So the real question is whether or not you need the insurance. To determine this, look at the worst case scenario by looking at the maximum interest rate that can be applied to the loan. For example, if you need to borrow $100,000 for 15 years, what is the highest the monthly payment might ever be? If that variable loan that is currently 2% can rise to 10%, can you still afford the payments? At 2%, the monthly payments are about $650. At 10%, they rise to about $1,100. If you can afford $1,100 payments, you can afford to take this risk yourself and do not need to buy insurance against it.

The Case for Self-Insurance

If you are already making extra payments on the loan, this risk becomes even lower for several reasons. First, you obviously can afford the higher payments. Second, every bit of principal paid down lowers the maximum payments, since the interest portion of the payment is calculated only on the remaining principal. Third, most fixed rate loans cannot go from their current rate to the maximum in one jump. There is usually a maximum annual increase. So even in a period of skyrocketing interest rates, it may still take several years to reach the maximum interest rate. During those years, the principal is naturally paid down. Fourth, if rates start rising, you can always readjust your financial priorities to throw more money at the loan, or possibly even refinance it. Fifth, money now is worth more than money later. Lowering your payments as a resident or young attending when there are many competing needs for extra cash can be really valuable.

Determining the Break Even Point

But what if interest rates stayed flat for 3 years before this process of rapidly rising interest rates began? Then which loan would be better overall? Well, by the time rates start rising the variable rate loan has already built up a “war chest” wealth advantage of $7,687 composed of $4,500 less in interest paid and $1,433 more in principal paid down. Because of that three year head start, even after ten years the adjustable rate mortgage still comes out ahead by over $8,000.

Interest Rates Are Going Up?

Many people are very concerned that interest rates will soon be significantly rising, not only because they are at or near historical lows, but also because the Fed has signaled that it will soon start raising short term interest rates. However, keep in mind that financial pundits have been predicting rising interest rates for 6 years now, while interest rates have continued to fall. Japan has had low interest rates now for over two decades. Interest rates don’t “have to” rise, and there is certainly significant incentive for the US government to keep them low given its own debt. Besides, the market is well aware of the risk of rising rates and the Fed’s pronouncements, so that information is already “baked in” to the difference between available fixed and adjustable rates.

An adjustable rate loan will “win” most of the time and the more flexible your financial life the more you can afford the consequences when it does not win. A fixed rate loan can be better, but only if rates rise rapidly early in the life of the loan. The “breakeven point” is usually far later than most borrowers assume without running the numbers. If you can afford the “worst case scenario,” and especially if your loan length is less than 5-10 years, give serious consideration to an adjustable rate loan, whether it is a student loan refinance or a mortgage. Certainly it is worth running the numbers yourself or hiring someone to do so prior to making your decision, rather than making it based on an irrational fear of a rising payment.

You May Also be Interested in
Most Popular
The Fear of the Coronavirus, and the Reality of the Flu
Top 10 Painkillers in the US
Improving Therapeutic Options for Patients With PTSD
Should Women Age 65 and Older Be on Hormone Therapy?
Ustekinumab Successful as a Target Therapy for Crohn's Disease