The PMD Critical List: The Top 7 Most Meaningful Jobs Are All Physicians 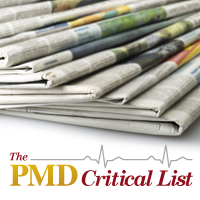 What kind of physician has the most meaningful job? The answer is in the top story of this week’s PMD Critical List. Also making the list: How to enrich relationships with patients, doctors tend to hide medical mistakes, and advice for female physicians looking to make it to the top.

• The 25 Most Meaningful Jobs That Pay Well (Forbes)
“Jobs that meet the world’s needs don’t have to pay a pittance–good news for the growing number of professionals who want to take home competitive compensation for doing work that makes a positive difference.” The top seven jobs are all physicians. Number one is Surgeon, with a $306,600 median salary and a 98% high job meaning.

• Changing How Patients and Doctors Talk About Death (Harvard Business Review)
“A program between the Brigham and Women’s Hospital and the Harvard T.H. Chan School of Public Health has made good progress changing the way patients and their doctors talk about death so that, in the end, patients’ wishes and their experience are aligned.” They identified a complex set of system failures that get in the way.

• How Physicians Can Enrich the Doctor-Patient Relationship (Value Walk)
A timely and telling Q&A with Dr. Adrienne Boissy, the CEO of the Cleveland Clinic and co-author of a new book, Communication the Cleveland Clinic Way. How To Drive A Relationship-Centered Strategy For Superior Patient Experience. Employing “The REDE (Relationship: Establishment, Development and Engagement) Model.”

• Trump’s HHS Nomine Just What the Doctor Ordered (Washington Examiner)
“Dr. Tom Price, an orthopedic surgeon and President-elect Trump's choice to lead the US Department of Health and Human Services, has a long legislative history of trying to ease new regulations that affect how doctors get paid by the federal government, endearing himself to major doctor groups in Washington.”

• Should Doctors Check Your Electric Bill? (Politico)
“Electricity might seem nowhere near the kinds of immediate concerns a doctor would expect to handle. But among public health experts, considering the full scope of a patient’s life is increasingly seen as crucial to managing the problems that might show up, only too late, as heath concerns.”

• Doctors Hide Medical Errors (Medical Xpress)
“While most primary care physicians would provide some information about a medical error, only a minority would fully disclose important information about potentially harmful medical errors to patients,” finds a new BMJ Quality and Safety survey. Physicians disclosure that falls short of patient expectations and national guidelines.

• Bellevue—Historic NYC Hospital (New York Post)
“Pulitzer Prize winning historian David Oshinsky reveals in Bellevue: Three Centuries of Medicine and Mayhem at America’s Most Storied Hospital, the New York City fixture—for all of its well-known troubles—has also been at the forefront of a number of major medical movements and discoveries.”

• Chronic Gum Disease Linked to ED (Fox News)
“Erectile dysfunction is more common in men with gum disease, according to a new review of existing studies. Scientists in China state that "chronic periodontitis treatment can control or eliminate inflammation and may reduce the risk of ED."

• 5 Tips for Female Physicians Aspiring to Healthcare Leadership (H&HN)
“Women in medicine seeking to advance their careers need to be prepared to work harder, promote themselves, be in the minority and, generally, just be prepared, according to a report from the annual meeting of the Radiological Society of North America in Chicago. Here’s some leadership advice.

• Globalization Hurt Factory Workers. Why Not Doctors? (Los Angeles Times)
“NAFTA did nothing to make it easier for bright Mexican students to train to US standards and work as professionals in the United States. In fact, we have instead left in place strongly protectionist measures for many professions, most importantly doctors. Protecting doctors from foreign-trained competition costs the US about $100 billion a year in higher medical costs.”