The Museum of Western Art: Kerrville, TX and its Poems without Words

DECEMBER 29, 2014
Eric Anderson, MD & Nancy Anderson, RN
We have something to do before we head for Bandera, next week. We have a lot of art to look at! 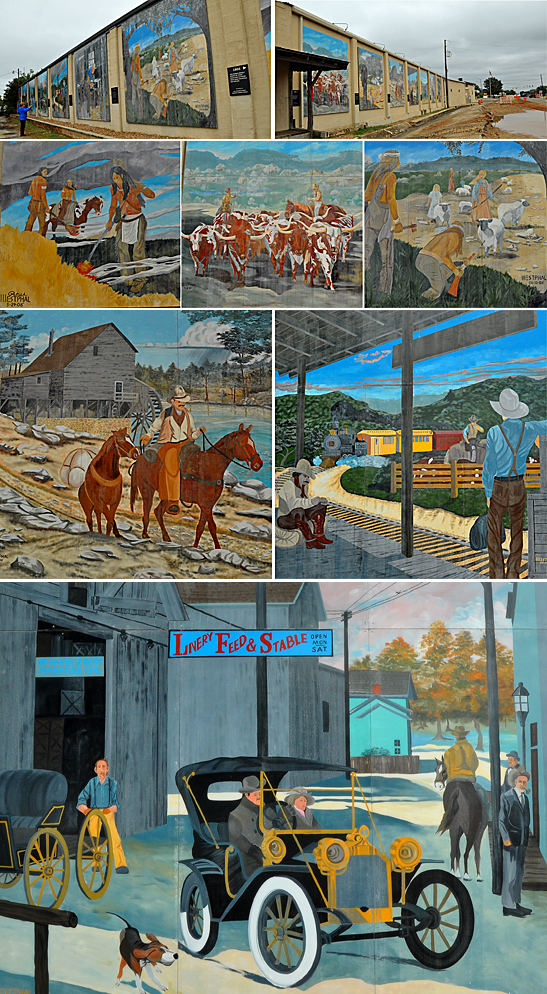 The 16 murals on the walls of the T.J. Moore Lumber Company were painted by local Kerrville artist Jack Reagan in 1989.

The Roman poet Horace once said “a picture is a poem without words.” Maybe so—but as you drive along Highway 39 near Ingram, TX and pass an old building, the T.J. Moore Lumber Company, and stop to see the 16 murals along 2 sides of its walls, you can almost hear the Texas Twang of the artist Jack Feagan. It may be a plaintive voice because he can’t be pleased with how inadequate the community’s efforts have been to protect them against the elements.

Feagan painted the murals in 1989 and now updated with the logo of “Patrick Westphal, 2008” they show the latest attempt to maintain those murals, which depict the pioneer struggles of Kerr County history. Feagan was used to struggles, he was one of 9 children born on an Arizona ranch. A successful artist, Feagan has created stained glass windows for several churches, designed pieces for Sea World and Six Flags and, of course, his oil paintings have graced the Museum of Western Art, 6 miles away in Kerrville, Texas

The Museum of Western Art is mostly why we chose to visit Kerrville on our 6-town, 12-day visit to the Texas Hill Country. It opened in 1983 at a cost of $2.5 million. We remember how impressed we were in the Buffalo Bill Historical Center in 1978 when we first saw the work of the Cowboy Artists of America there and later in the National Cowboy & Western Heritage Museum in Oklahoma City. It’s no surprise we’d find this museum in Kerrville. The account here points out that three-fourths of the 26 founders who met in Sedona, Arizona to build a museum to the art and culture of the American West were from Texas. The Amon Carter Museum and the Sid Richardson Collection of Western Art are indeed both in Fort Worth. 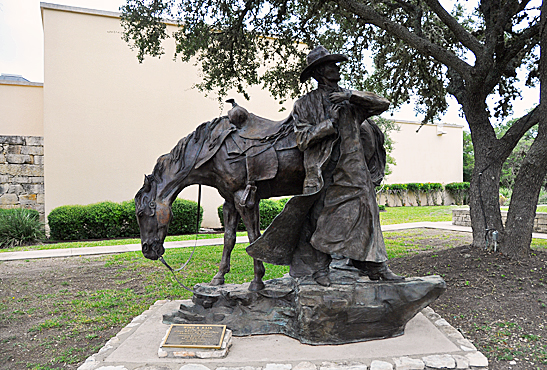 The sculpture that greets visitors is Wind & Rain, a gift from the artist William Moyers and his wife Neva in 1994. Like all the authors’ images in this article it was photographed courtesy of the Museum of Western Art, Kerrville, TX.

Two sculptures—one in the front of the building beside Wind & Rain, and one on the back patio—are so dramatic they provoke intense feelings. It is, no doubt, as hard for sculptors to convey movement as it is for photographers to do justice to the light and shade on inert images but Fritz White and Fred Fellows have clearly managed. 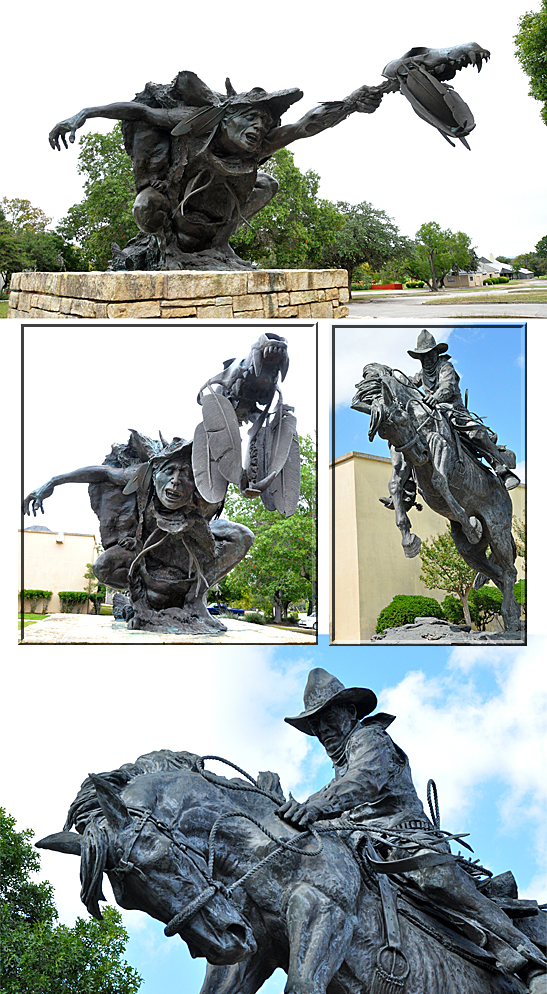 Top Image. Out of the Mystic Past. Artist Fritz White. A tribute to all pioneers past, present and future. Donated by Lamar Savings, May 1985.
Bottom Image. An Honest Days Work by artist Fred Fellows challenges some of the attitudes of today. His point is inscribed below the sculpture: “In the vast reaches of the American west the work ethic still exists. The man who makes his living on horses that are bound to buck, earns his pay. A good hand is loyal to his outfit, meets a challenge and takes pride in an honest days work.”

The museum has apparently changed from its original mission in the first few years to exhibit exclusively the Cowboy Artists of America. Now it shows “a picture history of American Life,” which may not be focused enough for those who love the legends of the Wild West.

However, we meet the docent who accompanies us on our tour, Andy Bachofen. He tells us that Fritz White, who created the scary Indian sculpture out front, had never been on a horse till he joined the CA (the Cowboy Artists of America)! 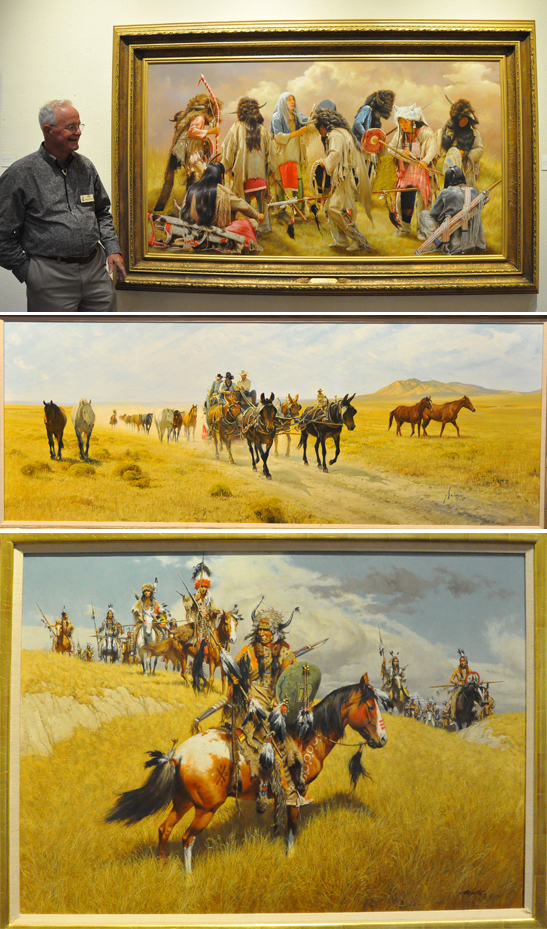 Top Image. Andy Bachofen shows us one of his favorites, Calling the Buffalo by Ed Copley. The buffalo are being called for 2 reasons: one, because they would at times not be near and a tribe would have lost some of its food supply; and two, it was a call to remember and honor their ancestors who hunted the buffalo without horses (because until the Spanish came the Indians did not have the horse).
Middle Image. Moving Camp Gouache by Gordon Snidow 1936. Snidow learned this technique from the French of putting a bright color, here the red on a wagon wheel, deep into a painting to give a 3D effect.
Bottom Image. Blackfoot Threat by Frank McCarthy (1924-2002). It is not clear whether the subjects are most likely Blackfoot and themselves the threat or they are another tribe watching for such a threat. Andy tells us they had a recent visitor from New Zealand who came in and excitedly asked, “Do you have any Frank McCarthy?” so he led her straight to this painting.

Something found in Cowboy Western Art that for sure you never saw in the European Age of Enlightenment is a self-deprecating sense of humor. 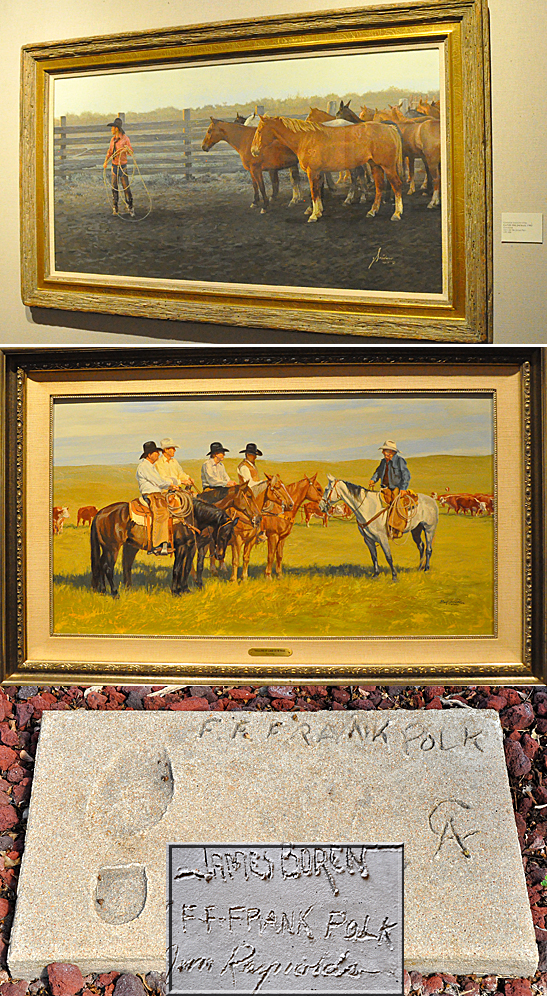 Top Image. Catch the Jackass by Gordon Snidow 1982 has the cowhand looking to his right but the interloper is hiding over on his left amongst the hordes.
Middle Image. Telling it Like it W-Was by Bud Helbig (1919-2002) is an insider joke. Frank Polk had a stammer that he could laugh at, and when he created his slab on the patio and signed the concrete plaque up front he signed himself F. F. Frank Polk. In the 1984 painting a group of young cowboys on the left is hearing a story of the West from Frank Ford on the right and his artist friend Helbig has incorporated the stammer in his title.
Bottom image. Frank Polk’s signature. 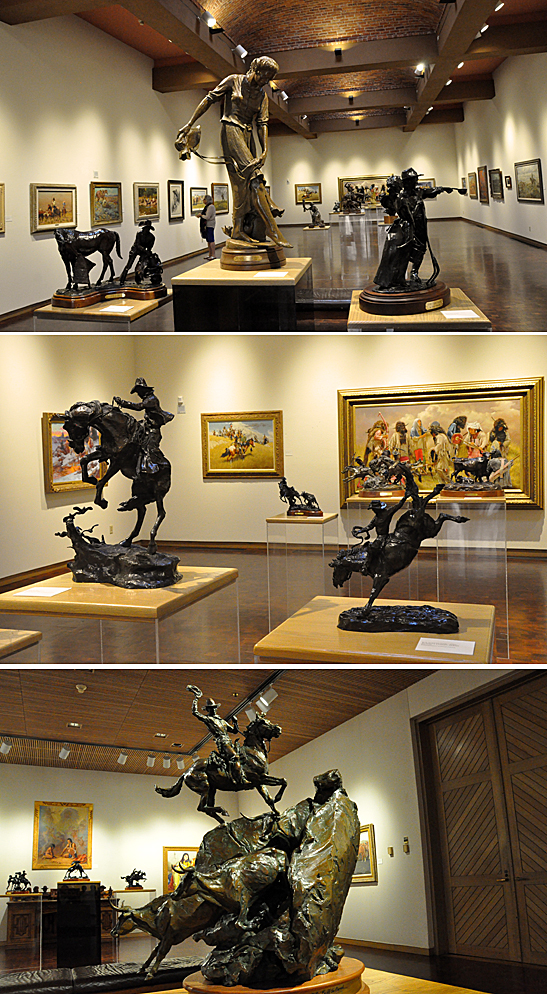 The museum’s interior has a magnificent collection of small sculptures, some reminiscent of the work of Frederic Remington. 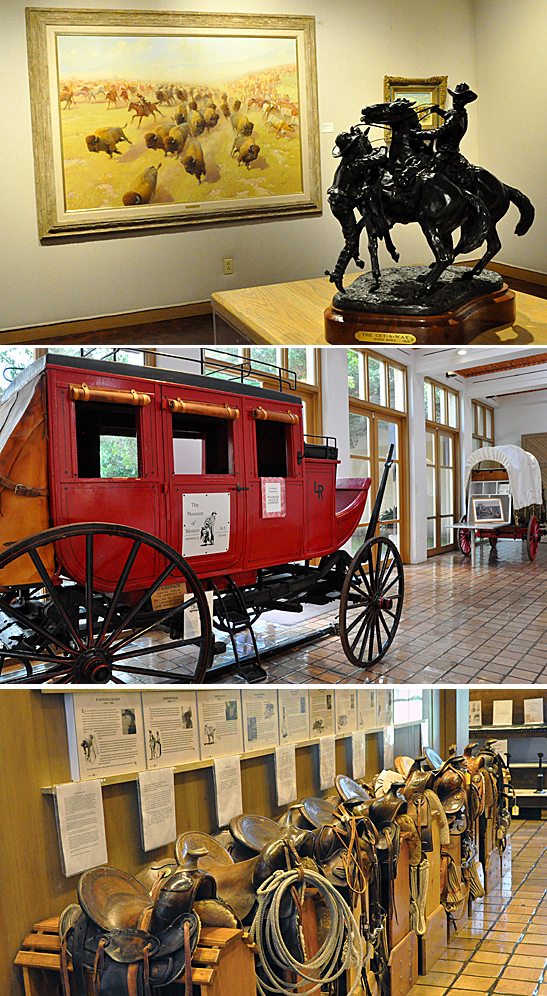 Ending a trip to the Museum of Western Art is a bit like watching the end of the movie Shane; You ride off into the sunset but—unlike Shane—you can come back. And besides, there is more to see in the rest of Kerrville.

Photography by the authors.

The Andersons, who live in San Diego, are the resident travel & cruise columnists for Physician's Money Digest. Nancy is a former nursing educator, Eric a retired MD. The one-time president of the NH Academy of Family Physicians. Eric is the only physician in the Society of American Travel Writers. He has also written 5 books, the last called The Man Who Cried Orange: Stories from a Doctor's Life.

You May Also be Interested in
Most Popular
Flu Cases Near 30 Million in the US, CDC Reports
Comparing RT-PCR and Chest CT for Diagnosing COVID-19
Limited Supply of Chloroquine, Hydroxychloroquine Could Affect COVID-19 Use
Gastrointestinal Issues Could Help Diagnose Coronavirus
Yolande Pengetnze, MD, MS: Text Message Platform Improves Asthma Outcomes