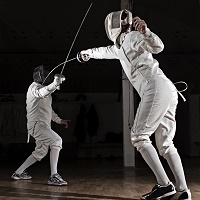 Editor’s Note: This article is the third in an occasional series by Nickole Kerner Bobley examining the myriad sports and activities physicians enjoy in their spare time. Each article looks at the origin and history of the sport and its health benefits. This article looks at fencing. Earlier stories covered rowing and Tai Chi.

Hear the word fencing and images of famous swordplay duels from the Star Wars film franchise or the swashbuckling Douglas Fairbanks films of yesteryear quickly spring to mind.

But did you know fencing is also an Olympic sport and a great way for non-Olympians to get and stay fit?

Yes, this elegant, prestigious combat sport heralds a rich historical tradition of weaponry and war. With either a foil, epee, or saber in hand you try to score points by hitting your opponent with your weapon while moving back and forth on an area called a piste. For safety reasons fencers now wear facemasks, gloves and protective jackets.

To be a successful fencer your must become graceful, aggressive, strategic, and strong. So practicing fencing provides myriad exercises for your body and mind. The physical benefits of fencing include increased coordination, agility, balance, flexibility, strength, and cardiovascular endurance. While fencing is a whole-body workout, it exercises the arms, thighs, hips, and buttocks hardest of all. You also benefit from fencing by gaining greater mental agility. Fencing is often referred to as “physical chess” due to the logic and strategy tactics behind the movements.

Fencing is an explosive start/stop sport where periods of high-energy activity are interspersed by periods of low-energy (a recovery period). As the body’s anaerobic fitness improves, it can work harder and for longer before lactic acid builds up in the muscles and forces them to slow down or stop.

Fencing is also an aerobic form of exercise so it supports heart and mental health by increasing oxygen in the blood and releasing endorphins that lead to a positive sense of health. The extra oxygen released in the blood improves circulation, boosts the immune system and enhances the body’s ability to rid itself of toxins.

The mental benefits of fencing also include improved focus, problem solving and stress reduction. As a combative sport you have to focus your entire energy on your opponent so you temporarily, unconsciously let go of life’s stresses as you strategize your movement to score points. As you hone your technique, you’ll also develop skills for channeling aggression into your own unique fencing style.

Ancient Babylonians, Greeks, Persians, and Romans all had some sort of fencing form in their societies. Originally fencing began as the practice of swordplay to prepare men for duels and warfare. The earliest account of fencing comes from a carving from Egypt in 1190 BC.

The 15th century brought great change to the sport of fencing: Spain starting publishing official fencing sport manuals with a set of rules and conduct to adhere to, then the Italians changed the style to a two-handed affair with your sword in one hand and a type of shield in the other. In fact this is how the term swashbuckler arrived – the swash was the sword and the buckle was the shield.

The shift towards fencing as a sport rather than military training happened in the mid-18th century when Italian sword master Domenico Angelo moved to England to teach the aristocracy the fashionable Spanish, Italian and French art of swordplay. During this time Angelo established the essential rules for posture and footwork that still govern modern fencing.

Fencing is one of only four sports that have been in every Olympics competition since 1896.

All students must first learn about fencing’s important protective gear and the overall safety precautions. Warming up and stretching is important to help prevent injuries in any sport. In a fencing class there is usually a fun warm up (sometimes set to music) that focuses on improving conditioning and flexibility. Then you are led through a series of movements to help develop a basic vocabulary of the sport (words like thrust, parry, riposte). Next, movements are strung together, new skills are added into the mix and practiced with rotating partners. When you feel finally ready you will bout with other students.

Should you choose to try or revisit fencing as an exercise, you will receive an experience some have likened to a chess game with knives that improves you both mentally and physically. En garde!

You May Also be Interested in
Most Popular
American Thoracic Society Releases Temporary COVID-19 Guidance
Post-Concussion Decisions Impact Recovery Time for Athletes
Flu Cases Near 30 Million in the US, CDC Reports
Accuracy of Screening for Bacterial Vaginosis Varies
Limited Supply of Chloroquine, Hydroxychloroquine Could Affect COVID-19 Use