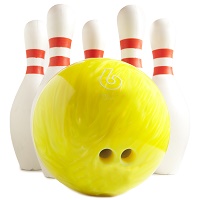 Editor's Note: This is the latest in our Physician Fitness series. To view more articles in the series, click here.

In a New York Times Well blog post titled “Why We are Motivated to Exercise. Or Not.”, Gretchen Reynolds writes about how for some time, exercise scientists have suspected that the motivation to exercise—or not—must have a genetic component. When researchers compared physical activity patterns among family members, and particularly among twins, they found that close relations tend to work out similarly, exercising about as much or as little as their parents or siblings do, even if they grew up in different environments. These findings suggest that the desire to be active or indolent is, to some extent, inherited. So if you do not crave exercise (like me) you are officially off the hook. It’s not your fault. However, as a medical doctor who may not crave exercise you know you still need to do it and therein lies the rub.

Say the word “bowling” to yourself and your brain conjures images and feelings of childhood nostalgia, birthday parties, rock music—good times with family and friends. Not exercise. But it is exercise, a hidden way to exercise.

But I haven’t bowled in years!

Heave a weighty ball down a greased wood lane toward battered wooden pins to make an obnoxious crashing sound.

Is bowling a glamorous exercise? No. View bowling-centric films like “Kingpin” or “The Big Lewbowski,” and you’ll quickly learn why some folks might even file this sport under the letter “T” for trashy. But is bowling a genuine way to sneak in a light workout? Surprisingly, yes—and it offers many health benefits.

According to The Bowling Foundation, more than 25% of Americans bowl each year, making it the nation’s largest participation sport. Approximately 2 million bowlers socialize and bowl together each week in leagues throughout the country.

It’s a simple game so it’s easy to learn. With a few quick adjustments you can quickly improve your game. It’s an inexpensive sport and boasts a low injury record. Bowling also features an electronic self-scoring system—so no one is burdened with doing the math.

While not an overly intensive workout, participants in bowling enjoy many health benefits.

Bowling increases your metabolism and therefore can aid in weight loss. Depending on the effort exerted and the weight of the bowler he/she can burn anywhere from 150 to 300 calories an hour. MayoClinic.org reveals an adult weighing 200 pounds can burn up to 275 calories an hour while bowling.

A bowling ball weighs about 14 pounds. Each time you step up for your turn to bowl (as many as 22 times per game) you are lifting a 14-pound weight. Complete a game and you’ve lifted 14 pounds 22 times!

You wouldn’t think you are doing a lot of walking while bowling. Surprise! You are. As you get up and walk from your chair to the ball return machine to the lane line and back you are creating a walking pattern. Purdue University’s Convert Activities into Steps web page explains a person takes an average of 71 steps a minute while bowling. Each bowling game lasts about 15 minutes. That equals 1,065 walking steps a game. Most people play about three games when they visit a bowling alley. If you bowl three games you will walk 3,195 steps in addition to the aforementioned weight lifting. And you’re still in regular clothing! Doesn’t feel like a workout at all. But it is.

The origins of bowling can be traced back 4,000 years to Rome and Greece. Bowling became very popular in Britain as early as the 1300s and was the favorite pastime of King Edward III’s soldiers. It was played outdoors on grassy lawns. European settlers brought bowling to the United States in the 1840’s. During Colonial times bowling was called “nine pins” and was banned because it was associated with drinking and gambling. Soon thereafter laws were put into place to outlaw it. Smartly someone added a “tenth pin” and renamed this game “bowling” and the sport, as we know it today, was reborn. In its new form bowling became a wholesome activity for people of all ages.

Most of us remember the bowling scoring terminology like strike, spare and turkey from our childhood. A few additional terms to know that regard the physicality of the sport are:

Delivery: This is your preparation, release, and follow-through of the ball.

Release: The hand motion as the ball is released onto the lane.

Slide: The last step of delivery.

Armswing: The arc of the bowling arm and hand from the first move toward the line until the delivery of the ball over the line.

Ask a friend or family member (or heck, invite your staff) to join you for a bowling outing and efficiently cross two items off your weekly to-do list: exercise and socialization. Bowling is fun. So for those of us who are exercise-shy this is a great way to get the exercise ball… well… rolling!

You May Also be Interested in
Most Popular
Denise Daley, PhD: Early Asthma Interventions for Infants
When to Suspect Diarrhea is Symptom of a Clostridium Difficile
Screen Time Linked to Inattentiveness, Behavior Problems in Children
New Model Predicts Suicide Risk with Health Record Data
Visual Impairment, Dementia Are Detrimental to Independence of Older Adults