FEBRUARY 23, 2012
Shirley M. Mueller, MD
St. Francis Xavier (1506-1552) was on a tear. He wasn’t satisfied with a family castle in Spain. Instead, he wanted military action. So he went to University and met Ignatius Loyola, who put a bug in his ear: “What good is it if people possess the whole world, but lose their very selves in the process?”

Francis listened, joined the Jesuits and the rest is history. He went to Goa, converted Hindus and Muslims to Christianity, started the inquisition and made a name for himself. Now, he lies in rest in his beloved Goa, or at least most of him. Bits and pieces were taken elsewhere as relics. 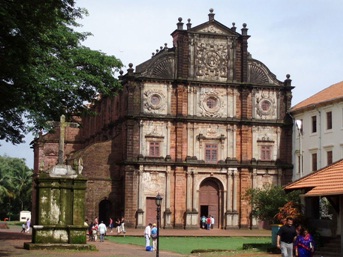 Most of St. Francis’ body is in the Basilica de Dom Jesus in Old Goa, India. Photo from Wikipedia.

The Basilica de Dom Jesus, where most of St. Francis’s body is located, was built by the Jesuits in 1594. It is one of several attractions in Old Goa, a UNESCO World Heritage site. Other major churches include the Church of St. Francis and the Se Cathedral. The need for various Catholic orders to build these monumental edifices suggests that the Catholics were competing among themselves for the “best in church” award, in part to impress the local population that they were trying to convert. 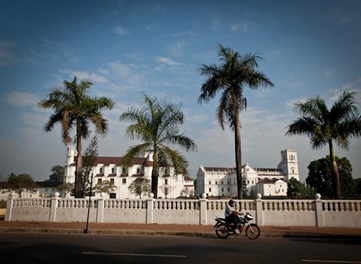 The Church of St. Francis was constructed in 1661 on the site of an earlier convent established by the Franciscans in the first part of the sixteenth century. An archeological museum is housed in a still remaining convent portion of the St. Francis of Assisi church.

To me, the exhibition space is remarkable, not only because of the beautiful inherent architecture, but also because it contains 60 paintings of Goa’s viceroys and governors seen, to my knowledge, only in this location.

The Se Cathedral has the distinction of being the largest church in Asia. It was built in the mid-sixteenth century by the Dominican order from Portugal. When the cost to build the church outpaced the monies available, the deficit was made up by forcedly taking over and selling the land of Hindus who died without converting to Christianity. This cash was used to support the construction of the church, which was ironically built on the site of a former mosque.

This religious fervor can also be seen in the font that St. Francis Xavier used to baptize new converts in the chapel next to the entrance of the Se Cathedral. It is a reminder of the bloody inquisition in Goa in which St. Francis Xavier played a pivotal part. 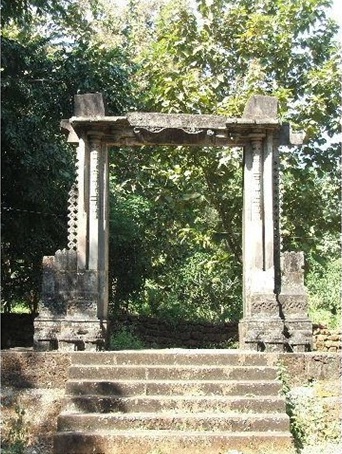 The Gate of Adil Shah's palace in Old Goa is all that remains of his palace. Photo courtesy of BP Willet.

Before Goa became Christian, willingly or not, it was first a Hindu community called Ela starting in the twelfth century. Later Bahmani Muslims occupied it and finally Yusuf Adil Shah (who is believed to be a Bahmani nobleman of Iranian origin) built a palace in Ela. At one time, most of the ground where the Church of St. Francis and the Se Cathedral stand today was occupied by Adil Shah’s palace. There is even a visible remnant: the gate.

Religious competition was a defining thread throughout Goa’s history. It is still an important dynamic in India’s culture as Hindus, Muslims and Christians, plus a bevy of other faiths, vie among themselves for power.

Some specifics:
How to get there: By car or bus from your local area accommodation.
Caution: Walking is easy and flat. Wear sunscreen and a hat for ultraviolet ray protection when going between buildings.
Total Time: This is a day trip and best treated as a full eight hours because there is so much to see.

For more information:
Faces of Goa by Karin Larsen — can be read on the internet