Living Life to the Utmost: Experiences versus Material Objects 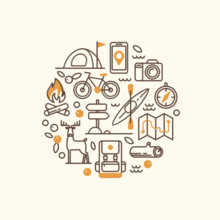 I will be flying to Lake Michigan in a WWII military airplane.

In late April 2018, my husband and I went to what is called a ‘rescue party’ sponsored by Indiana Landmarks, a local historic preservation organization. The objective of the event was to raise money to save historic buildings. We did not expect to spend any money beyond our admission, but when I saw one of the auction items, my brain went into overdrive. It was described, “Fly to Lake Michigan.” Now, that, by itself, would not have seized my attention as my husband and I travel via airplanes all the time. It was the portrayal of the airplane that was captivating, “in a 1944C-45H Twin Beech military plane.”

Flying in that plane would be an experience. To me, it would be worth a lot. As it turns out, when I bid, not many others thought the same thing. One person said to me, “Why would you want to do that? You could drive to Lake Michigan.” And, indeed we could, but the we wouldn’t have the excitement of flying there in a vintage plane. I can envision it as I write this piece—as we fly in this vintage plane, we plan to enjoy blue, sunny skies with the cornfields of the Indiana landscape below followed by the sandy dunes surrounding Lake Michigan.

According to recent research from San Francisco State University, my vision is not uncommon. I was hoping to achieve what that study supports, more satisfaction and greater value for my money from an experience than I would have from buying a material possession. Specifically, the memory of flying to Lake Michigan in a WWII military plane with my husband would be with me forever. Buying an expensive dress for an equivalent amount of money, which I would wear infrequently, would be effervescent.

The Crux of the Argument

Thomas Gilovich, PhD, at Cornell University was a pioneer in this area of experiences versus objects. He is wary of physical purchases giving sustained happiness, noting that there is a “wear off” effect. While we may be thrilled with an acquisition in the moment, it is less interesting in hours, days or weeks afterwards. In addition, the next similar purchase often requires hiking up the ante, i.e., the price we pay for it. Finally, we compare what we possess with our friends and neighbors and can never have enough. In sum, this means limited satisfaction with material possessions.1

Millennials Lap This Up

Finally, a 2014 survey by Harris Insights & Analytics, a market research company, suggests that the younger millennial age group (those born 1980-1999), prefer experiences over things. This is important because this group is the largest generation by population in America.

More on the Advantages of Experiences

The advantage of experiences as opposed to buying possessions applies to all areas of life, vacations being a prime example. In an earlier column, “Enhancing Happiness,” I wrote about Sarah Barney who takes her family on vacations. She is honing in on the social value of experiences with her daughters and son and their partners plus grandchildren in new environments.

Experiences don’t have to involve a lot of money, however. For example, owning a pet or volunteering for an organization in an area that is close to one’s heart can be more than satisfying and provide many memories. In addition, most state parks and museums have free entrance days that can be enjoyed with loved ones.

In summary, memories built through experiences are vivid and often permanent videos in our mind. Possessions are a different kettle of fish—a static photo which easily fades in time.

You May Also be Interested in
Most Popular
NIH Launches Initiative to Accelerate Curative Genetic Therapies for Sickle Cell Disease
Medical Robotics: Laser Guided Robot
When to Suspect Diarrhea is Symptom of a Clostridium Difficile
Top 10 Painkillers in the US
The 10 Worst Things Patients Can Say to Physicians