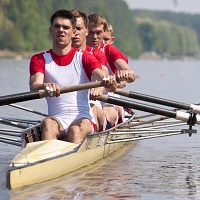 Editor’s Note: This article is the first in an occasional series by Nickole Kerner Bobley examining the myriad sports and activities physicians enjoy in their spare time. Each article will look at the origin and history of the sport and its health benefits. This first article focuses on rowing. If you have a suggestion for a future topic, email us..

The British-birthed sport of rowing requires a practiced mix of technique, power, and endurance, utilizing both anaerobic and aerobic energy systems. Although it appears to look solely like an upper-body workout, the power of the rowing stroke actually comes from the lower body – the legs. The whole body is involved in rowing and it offers resistance in both directions – forward and back movements – making you stronger faster by amplifying your core. Many muscles move while rowing: calves, quads, hamstrings, glutes, abs, obliques, pecs, biceps, triceps, deltoids, lats, and upper back.

Rowing is an extremely efficient all over body workout. A 50-minute spin cycling class burns around 600 calories while a 50-minute rowing class lets you burn an impressive 1,200 calories. That’s twice the amount of calories in the same amount of time. Plus, this smooth, gliding styled exercise is low impact and, therefore, easy on the joints. With each rowing stroke you are moving your entire body so you elevate your heart rate making it a terrific fat burning, fast twitch fibers training and low impact workout. Additionally, for runners nursing an injury, rowing can be a safe way to keep fit and train while seated. A bonus with rowing, unlike running, is the exercise itself can actually help improve your posture.

Long before rowing became one of England’s signature sports, it was an important part of warfare, commerce and recreation for many early civilizations. From ferrying passengers across water to hauling goods to providing funerary services, rowing has been a valuable entity to human beings.

In 1829 England’s first intercollegiate race was held between Oxford and Cambridge universities. In America during the 1800s Yale and Harvard Universities formed their crews, and in 1852 they competed against each other in the first US intercollegiate regatta. Rowing became an Olympic sport in 1922.

In the early 1900s for use in off-season training, several US colleges began using indoor rowing training equipment for their athletes. From initial, crude rope and pulley systems to today’s modern air, magnetic, and water resistance machines, there are myriad manufacturers who produce rowing machines for commercial and in-home use.

Around 2011, as Prince William of England wed Kate Middleton, Americans began expressing an interest in rowing as a popular exercise again. A new breed of rowing machines (many with popular actual real water resistance features) became available and found themselves center stage in the gym again. Many gyms began offering rowing classes in the same manner they were offering their spin classes: exercise class leaders shouting, “Ready all, row!”, music pumping, and participants rowing in synchronicity with each other.

Should you choose to try or revisit rowing as an exercise, you are sure to get a full-body, fat-burning and heart-healthy workout. As our friends across the pond say “Sit Ready!” (and ROW!).

You May Also be Interested in
Most Popular
Hydroxychloroquine Speeds Up COVID-19 Recovery Over Placebo
American Thoracic Society Releases Temporary COVID-19 Guidance
Limited Supply of Chloroquine, Hydroxychloroquine Could Affect COVID-19 Use
ACE Inhibitors & ARBs: Wading Into the Unknown of COVID-19
Concern Over Sleep Apnea and Coronavirus Transmission