Comparing a 10% Tithe to a 1% Account Fee: Which Will Cost You More?

SEPTEMBER 26, 2017
Physician on FIRE
A few weeks ago, I was asked by a reader to consider writing about the financial impact of charitable giving on wealth building. I was hesitant. While I believe in charity — I’ve pledged to donate half this blog’s profits — the inescapable fact is that parting with money decreases wealth. Greed trumps generosity when it comes to financial gain.

I let the idea simmer on the back burner for a few weeks. How could I write this post without looking like a cold-hearted jerk who wants you to hoard your money? That’s not me! I absolutely believe you can and should give some money away. Giving may not add to your net worth, but it can make you happier.

How about a comparison? I’ve already displayed how investment fees can cost millions. What if I compared a 10-percent tithe, the type of giving the reader inquired about, with typical investment fees, which are on the order of one to two percent. At first blush, it seems that math would favor the 1-percent fee over the 10-percent tithe. But if that were so, this post would not have gotten out of the gates. Let’s dig a little deeper. 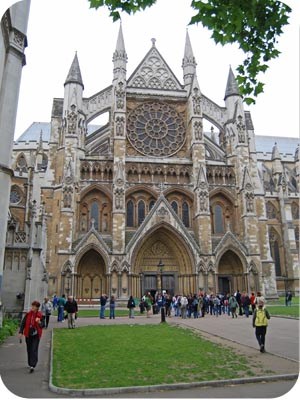 Abbeys don’t build themselves.
To tithe is to donate 10 percent of your income to a charitable organization (typically a church). While I imagine there are many gray areas and different ways to calculate this, I know some people choose to give 10 percent of their paycheck, that is, 10 percent of what’s left after taxes, pre-tax investments and insurance payments have been subtracted by the employer. That’s how I will calculate a tithe for this exercise.

“the true cost of our 10-percent tithe is 3 to 5 percent of gross salary.”


Typical fees in an investment account are in the range of 1% to 2%. It is possible to keep fees much lower; a DIY investor should be able to create a portfolio with no fees other than the expense ratio built into the investments. My portfolio costs me about 0.08% per year. 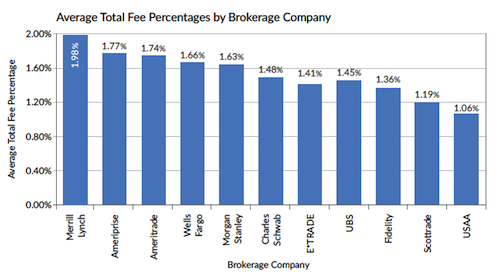 Is it possible for a 1% to 2% fee to cost more than the 3% to 5% true cost of a tithe? Of course it’s possible. If you’re a saver, it’s almost inevitable. We’re talking about percentages of different things. The investment fees are taken from the value of your entire portfolio. The tithe is taken from your annual income.
When you’re young, and your net worth is low, the tithe will cost more. As your net worth grows to a multiple of your annual income, the “small” management fee will surpass the cost of the tithe, and the discrepancy will only grow bigger with time.

Borrowing some numbers from this post on specialty choice, we’ll run some numbers for Dr. Altruism, one of our physicians who is in a lower salary tier. We’ll calculate the number of years to financial independence for a Dr. Altruism who tithes, and compare to the ironic non-tithing Dr. Altruism with typical investment fees of 1%, 1.5%, and 2% eating away at the portfolio like a very hungry caterpillar. 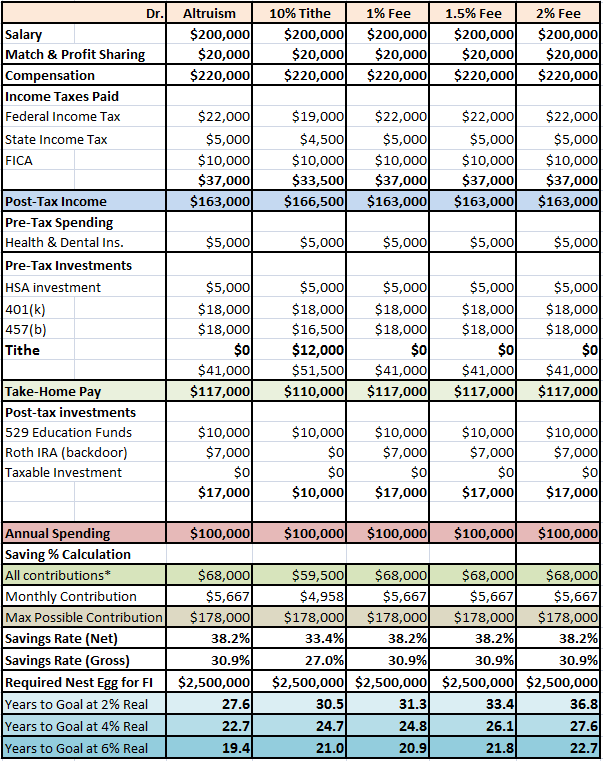 The numbers at the bottom are the key numbers. Looking above them, we see that “Post-tax income” is higher for the tithing Dr. A, due to the tax deduction for charitable giving. The “Take-home Pay” line is lower, and reflects what’s left after the tithe. Also note that the tithing Dr. A had to choose between funding the 457(b) and 529 fund since there wasn’t enough to do both, or fund a taxable account.
Dr. A has a $200,000 salary, and his paychecks add up to about $10,000 a month. Donating $1,000 a month, he will tithe $12,000 a year. With an estimated $3,500 benefit from the related tax deduction, he invests $8,500 less per year than his Scroogey counterpart. His generosity delays reaching the $2,500,000 goal by one and a half to three years. 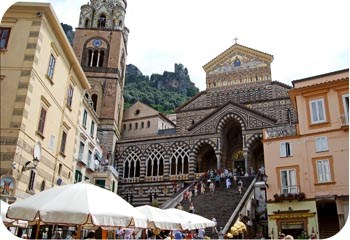 How does this compare to the addition of a 1% fee on his investment portfolio? The 1% fee has essentially the same effect as the 10% tithe over the course of twenty to thirty years. Increase the fees to 1.5% or 2% and tithing is a clear winner.
Going back to the original question posed in the title, it appears we have a tie. But wait! What happens in retirement? The account fees don’t go away. In fact, if the portfolio grows, as it most often does when using a 4% withdrawal rate, the cost of the fees will grow right along with the portfolio.
What about tithing in retirement? I’m certainly not the authority here, but I’m going to assume that our tithing physician will continue to be charitable in retirement, but to a lesser extent. Without the big income, I’ll assume the tithe is cut in half for the sake of this exercise. What was once a $12,000 tithe costing $8,500 will be reduced to a $6,000 tithe at an annual cost of $4,500.

As expected, the hoarder ends up with the most money throughout retirement, but the tither keeps pace far better than the fee-paying non-tithers. For purposes of this exercise, a constant 5% nominal return (likely 2% to 3% real) was assumed for a somewhat conservative retirement portfolio. $100,000 a year was taken from the portfolio for the first four scenarios, and the Tither withdraws $104,500 per year.
Additional assumptions include that we started tracking Dr. A at a net worth of zero at age 32, and it took 30 years to amass the $2,500,000 portfolio, which is within the range in the first spreadsheet. Depending on student loan debt, market returns, and of course investing fees, the retirement age could be anywhere from about fifty to mid-sixties in this scenario.


What About a Shorter Career, i.e. FIRE?


Dr. Bettercheck has a higher salary, but the same spending habits as Dr. Altruism. Without a tithe, the good doctor is on pace to be financially independent in only 13 to 16 years. How do fewer years worked alter the effect of the tithe? 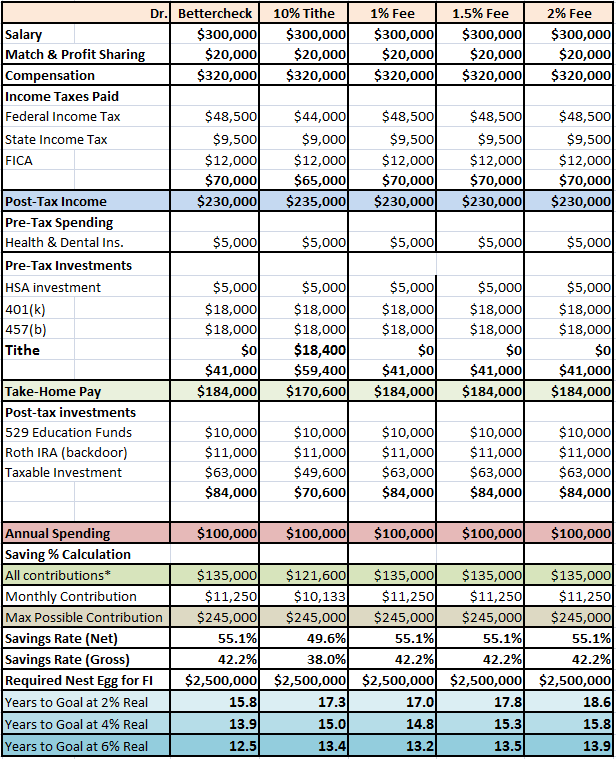 A 10% tithe will add a year to a year and a half to Dr. Bettercheck’s career. Compared to the non-tithing Dr. with 1% fees, he will be working an extra two to three months to amass the $2.5 million portfolio. Again, the tither wins out compared to paying 1.5% or 2% in fees.

As before, we’ll assume the tithe is slashed in half at retirement, resulting in an annual post-retirement tithe of $9,200, at a cost estimated to be $7,500 per year. Using similar assumptions of 5% returns, $100,000 withdrawn by most, and $107,500 from the tithing Dr. B, we arrive at the following results.

It should come as no surprise that the doctor comes out ahead when he donates a portion of his salary each year, as opposed to giving up a percentage of his nest egg annually. Once again, the tither doesn’t keep pace with the tightwad, but remains on track to gain substantial wealth with returns of 5%, whereas with a 2% investment fee, the doctor could be worse than broke as a nonagenarian.

There are two messages today.

One: Giving is good.

The government rewards it, and quite generously for those of us in the higher tax brackets. Donating 10% of your paycheck to bona fide 501(c)(3) charities will delay your ability to retire, but not by all that much. The fear that a tithe can do serious damage to your economic well-being turns out to be a paper tither. Giving is Grrrrrr….eat!

Two: Fees can be killer.

Like a tiger. A 1% or 2% fee sounds miniscule, but compared to a 5% return, we’re looking at a reduction in your investment returns of 20% to 40%. If portfolio returns in a given year are only 2%, you are looking at a reduction in return of 50% to 100%! In a multimillion dollar portfolio, that is huge.
Can the fees be worth it? That’s for you to decide. The average DIY investor underperforms the indexes by 4% to 7%. As outlined in the Top 5 Ways to Manage your money, there’s a good way to DIY and a downright disastrous way.
I hope I’ve done an adequate job convincing you not to hoard your money. Keep a lid on your investment fees, and you can afford to be plenty charitable. Give to whomever you like; if you want the tax deduction, though, be sure the recipient is a registered non-profit organization. Guidestar.org has a searchable database with 1.8 million of them.
Understand that I chose to look at a tithe because that was specifically requested. Additionally, I realize there are different ways to calculate a tithe, but I had to choose one.
Of course, the mathematics would not change one iota if you choose to give your money to a dog shelter or curling club, as long as you are able to take a tax deduction on the donated money.