Let’s consider four physicians who live decidedly different lifestyles in terms of spending. I like to crunch numbers, and the best way to truly evaluate the effect of lifestyle is to do just that.


We’ll establish a baseline that is identical for the four physicians in question. Each of them is now debt free, but has not started saving for retirement. Each has purchased a home that suits them. Each has a household income of $300,000 and files taxes as married, jointly. They’ve each got a couple kids and contribute a total of $10,000 to 529 accounts each year.


Dr. Anderson discovered this site in medical school, and has educated herself in personal finance. She has made financial independence a goal and knows how to achieve it. She contributes the max to retirement accounts, and puts the remainder in a taxable account. She lives in a low cost-of-living city and drives a reliable used Honda. Her annual expenses after income taxes are about $80,000 a year.


Dr. Benson discovered this site in residency. He doesn’t want to work forever, but he enjoys some of the “finer things” in life now that he’s making $300,000 a year. Like Dr. Anderson, he contributes the max to retirement accounts, and puts the remainder in a taxable account. He lives in a moderate cost-of-living city and drives a new BMW 3-Series. His annual expenses after income taxes are about $120,000 a year.


Dr. Carlson discovered this site last week, but she’s been reading The White Coat Investor for several years. Her favorite post is the one about loosening the purse strings. Like the others, she contributes the max to retirement accounts, and puts the remainder in a taxable account. She lives in a high cost-of-living city and drives a leased BMW 7-Series. Her annual expenses after income taxes are about $160,000 a year.


Dr. Dahlgren has not discovered this site and hasn’t found the time to pay much attention to his finances. Like the others, he receives a profit sharing contribution to his 401(k) from his employer. He also contributes a little from his paychecks to the 401(k) to receive a partial match. He has no debt, but lives pretty much paycheck to paycheck. The Ferrari doesn’t pay for itself, you know. His annual expenses after income taxes are about $200,000 a year. 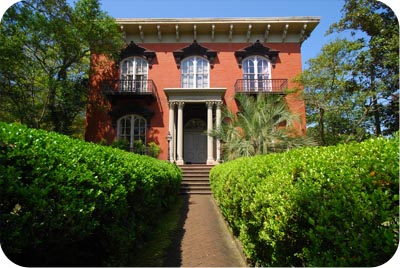 Here is a sample budget for these four physicians. Most expenses are scalable, but some, like healthcare costs and donations, I kept constant. I didn’t include line items for country club dues, second homes, stable fees, etc… but I do have a travel and miscellaneous category as a catch-all. Let’s have a look. 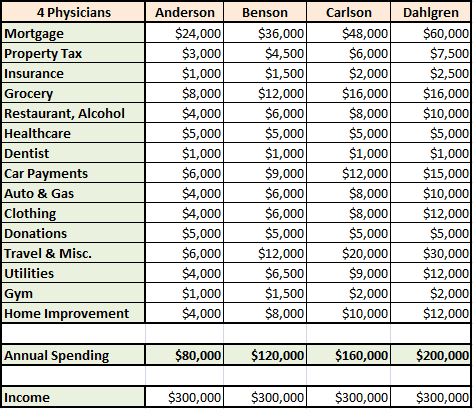 Now, let’s see how all this spending relates to the focus of this blog, which is Financial Independence and the ability to Retire Early.

Note that Dr. Benson and Dr. Carlson pay a bit less in income tax because of their increased deduction on property tax and mortgage interest. Dr. Dahlgren pays quite a bit more because he doesn’t come close to maxing out his tax deferred space in his employer sponsored 401(k), 457(b), or HSA. 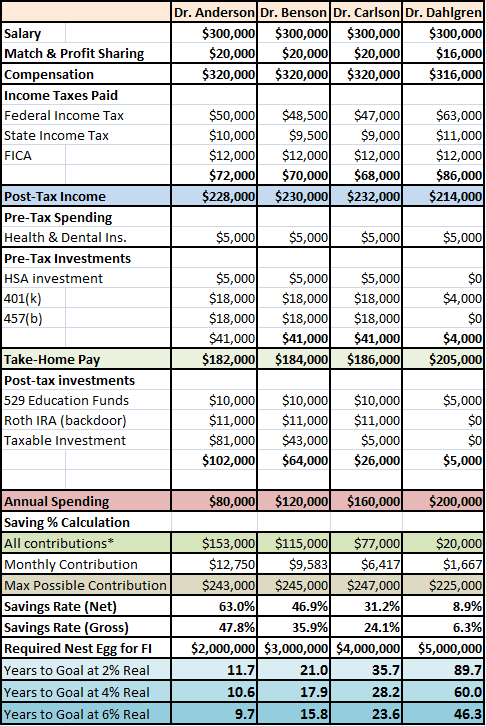 The real substance of this post, and the reason I created it, is in the turquoise shaded numbers at the bottom. You’ll see that Dr. Anderson is in position to be financially independent in about 10 years with her annual spending of $80,000.
Dr. Benson is in pretty good shape, with a cushier lifestyle, reaching financial independence in 16 to 21 years, perhaps in his late forties or early fifties
Dr. Carlson, spending twice as much as Dr. Anderson annually, won’t be financially independent for 24 to 36 years, depending on market returns.
Dr. Dahlgren will be working well into his seventies, even in a best case scenario. This is a good time to ask yourself a simple question, what do you value more, Your Money or Your Life? I hear that’s a good book, by the way.

What do you think? Would you rather live a pretty good lifestyle and achieve financial independence in 10 years? Or live for today until you’ve got great-grandchildren?

Perhaps Dr. Benson or Dr. Carlson are more your style. As you might have guessed, my finances these days more closely mirror Dr. Anderson’s. Now that we are debt-free, we have a net savings rate around 75%. It does take some discipline, but it makes me happy and helps me sleep well at night (as long as the pager is quiet).