The Off-Target Effects of Acid-Reduction Therapy 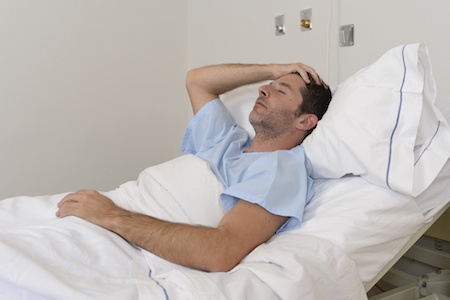 As a second year medical student, I was stressed out about upcoming finals and the USMLE step 1 exam. I woke up one night with a chest pain I had never experienced before, and I won't entirely blame hypnopompic hallucinations, but I originally thought I was having a heart attack. Thankfully I tried a sip of cold water before deciding on going to the ED. Since the water seemed to help, I went back to bed and tried my best to forget about it. I woke up again the next night in pain, again wondering if I was having a heart attack since the chest pain was almost as bad as the night before. After waking up a little more, I took some calcium carbonate, which dramatically improved the pain. After that, I went on acid-reduction therapy and never had to experience that pain again.

Apparently, I am not the only one who experienced a chest pain thinking it was a heart attack. A recent study by Baumann et. al showed that patients with a high likelihood of GERD had fewer chest pain-related return ED visits if they were discharged on a proton pump inhibitor (PPI). In other words, acid-reduction therapy keeps GERDers out of the ED. (Now, if only there were a drug that could keep GOMERs out of the ED, too.
There are other off-target benefits of acid-reduction therapy. A surprising one was the decreased incidence of heart failure in histamine 2A antagonist users, as demonstrated in the MESA study. Keep an eye on future developments linking traditional gut-oriented medications to treat cardiovascular diseases.

But while on the lookout, take note of the other side of the Henderson-Hasselbalch equation. As with any medicine, there are downsides. Studies have found a correlation between PPI use and developing dementia, both in animal models as well as epidemiologically.

Also, though they may prevent return ED visits in GERDers with chest pain, the use of PPIs has been linked with increased myocardial infarction risk. Thus, while PPIs can prevent non-cardiac chest pain in some, they may actually contribute to cardiac chest pain in others.
The take home of this article is really for whoever has prescribed a PPI for hospitalization-related stress ulcer prophylaxis. Think before your prescribe PPIs. H2A blockers are fare game though.
For more articles on the power of the alimentary tract, visit McLarson, MD at Physician’s Money Digest.