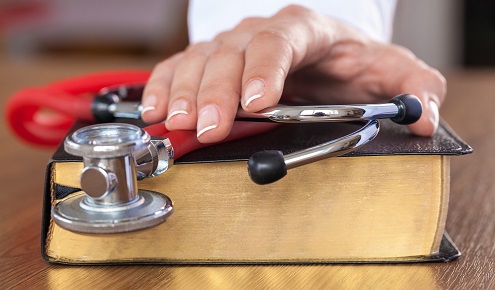 Around the world, people who live in countries with higher overall educational levels and a greater economic standard of living tend to have fewer citizens who believe in a higher power. And within the United States, an advanced educational level, particularly in the natural sciences, has been consistently associated with a decreased likelihood of faith in a deity, while individuals who enjoy financial security are also less likely to believe in a divinity.

But interestingly, physicians completely flip that relationship between education, financial status and religious faith. Medical doctors are widely considered the most highly educated and financially stable professionals in almost every country around the world. Yet, unlike other educated scientists and financially secure citizens, doctors are more likely to believe in God.

A University of Chicago study concluded that a whopping 76% of doctors stated that they believe in God, compared with only 39% of scientists, and about 70% of Americans overall.

Education and physician faith
While the percentage of doctors who believe in God is about the same as the general population, it is particularly interesting that physicians are more likely to believe in God than are other individuals who are educated in science.

There are a number of possible explanations for this huge gap. While physician education demands a strong command of the sciences, medical education and training require a different approach. The studies of physics, chemistry and biology are based on understanding scientific rules that are established by observation and experimentation, while medical studies are fundamentally based on the human body. The human body certainly follows rules that are explained with biology, chemistry and physics, but there are many unanswered questions about how the human body works, how it deteriorates, how it heals and how it responds to medical intervention. Success in medical studies and the process of providing patients with medical care requires a certain comfort level with many unexplained scientific concepts.

The finding that doctors are more likely to believe in God than other individuals who are on equal financial footing may have to do with the tenuous life and death situations that most physicians encounter. This regular confrontation with mortality and unpredictably is a constant reminder that a patient cannot buy his or her way out of life threatening or terminal disease. This could make financial security less meaningful for physicians than it may be for other well-compensated professionals who may not be faced with the stark limitations of the power of money on such a regular basis.

Negative life events and physician faith
Another interesting issue in the physician work environment is that physicians often witness terrible events that most people would consider unfair. Nice people get sick, children lose parents and innocent people suffer. Many would question whether such distressing events would push doctors away from belief in a God. Yet, it appears that even while physicians are exposed to seemingly unjust patient distress, most continue to believe in God.

This is hard to explain, but perhaps it is due to the unexpected peace that many dying patients exhibit or to the observation that many events that appear 'bad' are often not as straightforward as a simple ‘good and bad,’ But, whatever the reason, human suffering itself, which doctors frequently see close up, does not seem to preclude faith in a greater power as might be expected.

Religious diversity among physicians
According to the University of Chicago study, physician religion is characterized not only by the high percentage of doctors that believe in a deity, but also by a wide diversity in physician religions. Many physicians in the US are international medical graduates, and thus there is a substantially higher representation of physicians who adhere to religions that are more prevalent outside the US, but that are in the minority in the US (such as Jewish, Hindu, Muslim and Buddhist.)

Interestingly, exposure to other religions has been found to contribute to a lower overall belief in the existence of a divinity, but in the case of medical doctors, the interactions with respected peers of other faiths does not seem to diminish belief in religious faith. Perhaps this is because the exposure to other faiths of medical colleagues occurs at an older and less impressionable age than would be expected to cause a person to doubt his or her faith.

Doctors, faith and religion
It is very difficult to understand why physicians have a stronger predisposition to faith, religion and religious adherence than peers of equivalent educational and economic levels. It could be that religious faith itself plays a role in a person’s choice to become a physician. Interestingly, physicians were less likely to make their faith part of their day-to-day work than most people in the general population. So, even though doctors are likely to believe in a higher power, they are also heavily inclined to let the patient take the lead when it comes to bringing faith and religion into patient care.


You May Also be Interested in
Most Popular
Denise Daley, PhD: Early Asthma Interventions for Infants
Banafsheh Kashani, MD: Telemedicine for Women's Health During COVID-19
Point-of-Care Newborn Testing Could Improve Pediatric Sickle Cell Care
View From the Trenches: Does Patient Portal Data Entry Work?
E-patients: What You Need to Know and How You Can Help Them