Who is Tom Price, MD? 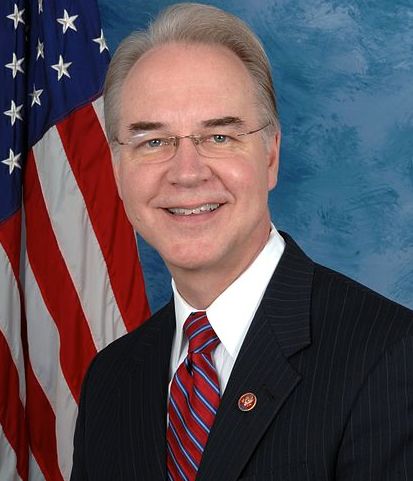 [FPMD: This article was initially slated for publication last Thursday.  I opted to delay it given the tragic news last week. Regardless, I still think it's a worthy read as the Secretary of HHS will have a powerful voice in our nation's health policies.]

By now you've heard that president-elect Trump is nominating conservative Republican representative Tom Price, MD of Georgia's 6th congressional district as the 23rd Secretary of the US Department of Health and Human Services (HHS).  Read on to see why you should care.

What’s the HHS got to do with me?

The United States Department of Health and Human Services (HHS), also known as the “Health Dept”, is a cabinet-level department in the executive branch of the US government.  Its goals are summed up by its motto – “Improving the health, safety, and well-being of America”.  Prior to 1979, it was known as the The Department of Health, Education, and Welfare.  HHS came to be when its educational functions were transferred to the newly created US Department of Education in 1979.  That all sounds great, but why should you care?  Let’s look at a few selected agencies under the umbrella of HHS:

Who is Tom Price, MD?

Dr. Price is a graduate of the University of Michigan Medical School.  He completed his orthopedic surgery residency at Emory University in Atlanta and worked in the private sector for 20 years before joining Emory’s faculty in 2002.  He also served as the director of the Orthopedic clinic at Grady Memorial Hospital.  Dr. Price got his start in politics through the Medical Association of Georgia and was elected to the Georgia state senate in 1996.  He functioned as the state senator of Georgia’s 56th senate district until 2004 when he was elected to the US House of Representatives, succeeding Johnny Isakson as representative of Georgia’s 6th congressional district.  He has retained that seat since then, most recently winning re-election in 2016 winning 61.6% of the votes.

Since his nomination, there has been many editorials written about Dr. Price’s anticipated impact as HHS secretary.  Below is a summary of his political stances and why there has been so much controversy surrounding his nomination. In summary, the nomination of Dr. Price to head the HHS is controversial, however not unexpected.  Given President-elect Trump’s repeated vows of repealing Obamacare, he could not have found a more vocal champion.  It remains to be seen whether any of Dr. Price’s proposals will make its way into the anticipated healthcare reform bill.  But whatever the outcome of the final legislation, Dr. Price will have a powerful hand in its implementation and regulation.

Questions and comments?  Reach out to me at http://futureproofmd.com/.