It's an Operating Room, Not a Phone Booth 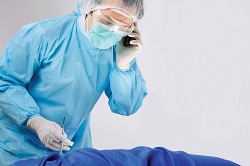 Cell phones, and the surgeons who use them in the Operatin Room, are causing mischief there.

1. A surgeon was accused of leaving a cell phone in a patient's abdomen.

3. Cell phones carry nasty bacteria, including fecal contaminants, that have the potential to cause hospital acquired infections.

4. OR personnel take pictures of patients and their specimens without permission and send them over non-HIPAA-compliant eCare black market platforms.

5. Cell phones get lost and wind up in the trash.

A recent post on a LinkedIn group site got quite a response to the question of whether cell phones should be banned from the OR. The arguments were passionately pro and con and generally revolved around eliminating any unnecessary distractions to causing significant communications and workflow disruption if they were banned.

It seems there is a middle ground, determining and publishing guidelines for use and decontamination and holding OR personnel accountable. The reality is that for most healthcare personnel, they are increasingly dependent on mobile communications and information technologies to do their jobs and it will only get worse.

Physicians and medical groups such as the American College of Surgeons and the American Academy of Orthopaedic Surgeons have spoken out about restricting nonmedical cell phone use in healthcare settings and in the operating room (OR).

My personal experience from 40 years in the OR is that there are significant and insignificant distractions and routine and critical or stressful parts of an operation where any distraction is undesirable. In the latter instances, I turn off music, ask the OR staff to stop unnecessary chatter or mobile activity and call attention to the fact that I need everyone's complete attention to help manage the issue.

That said, banning phones will create unintended consequences. Rather, we need to protect patients while at the same time help patients by not limiting the tools doctors and other OR personnel need to do their jobs.