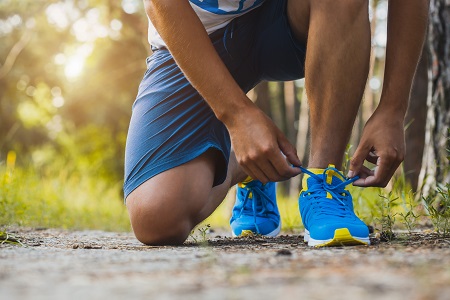 I was going through some motivational books that belong to my sister (and that’s one motivated lady) during my visit to her home in Houston over the Thanksgiving holidays.

I came across one by my uncle, George Sheehan on Running to Win (Roldale Press, 1992). Written one year before his death, it offers empowering prescriptions for life – healthy habits for physicians to live and pass on.

George A. Sheehan, Jr., MD, the nationally-renowned “Running Doc,” was the guru of the sport in the 70s and 80s. Sheehan revolutionized the sport of running as a means of total fitness for mind and body. A best-selling author and in-demand lecturer, he was also a practicing physician for 30 years (my dad’s medical partner).

With a recent AMA survey showing that “running or jogging on a regular basis” to be the doctor’s favorite physical activity, it might pay to heed to his broader wellness wisdom. My uncle, the good doctor, and the runner’s deity, nails it here.

“A group of researchers found out how to be extraordinarily long lived, happy and productive,” Sheehan explained. “Back when this study was done, Americans had an incomplete program for getting the most out of our bodies. But we learned from these Californians rules that we can all profit from following.”

These rules, which have come to be known as “The Alameda Seven,” are as follows:

“These observances have stood the test of subsequent scientific investigation,” George said. “They work. People who follow six of those rules live significantly longer than those who follow one or two. And not only do they live longer, they’re less likely to be hospitalized and they’re more energetic and productive as well.”

George explained that’s humanity’s “aim in not only a long life but one free of incapacitating disease. We want to get sick as little as possible, and if we do, we want to recover quickly. We would like to live a fully functioning life until the last possible moment. And “The Alameda Seven” will apparently ensure that as well.” My uncle concludes with: “How to best live long and live well? Following “The Alameda Seven” is a very good start—and has good precedent.”

Note: As part of a quick review, I learned that Lester Breslow, MD, played a key role in developing the “The Alameda Seven” beginning in 1965. According to his 2012 LA Times obit: Dr. Breslow, an UCLA researcher “became known as "Mr. Public Health" because of his research emphasizing the beneficial effects of avoiding certain behaviors, such as smoking, overeating and failing to exercise regularly.”