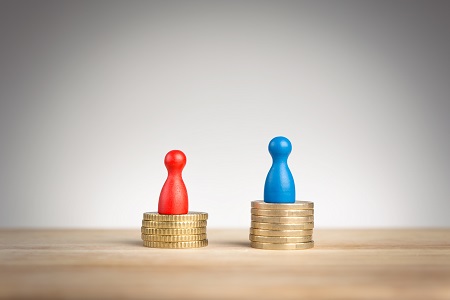 A large 2016 study from Harvard showed there is an “atrocious” gender wage gap in medicine. After factoring out variables, such as hours worked and so on, the income gap by specialty varied from about $20,000 to a whopping $50,000 in some of the surgical specialties. Surprisingly, the gap has disappeared in radiology. For what are yet unexplained reason(s), they are the equality leaders.

The obvious explanation for this income spread is continuing male discrimination. The problem seems to be preconceived notions. “Work done by women simply isn’t valued as highly.” To back this up, surprising research has shown that when women go into any occupation in significant numbers, the pay drops overall, even for men. But let’s get into the weeds to see what that really means. Let’s start by looking at context.

WWII male personnel shortages started the assault on traditional roles, with the iconic “Rosie the Riveter.” Over time, as the economy boomed, women started to go to work in larger numbers because of increased opportunities combined with increasing need to supplement family income.

In the 1970s, the wage gap for similar work was about 60%(!), but today that has been whittled down to 80% for the economy as a whole. Interestingly, the gap has been reduced both for less educated and for well-educated women, compared to their male peers. This suggests a society-wide change in the perception of “appropriate” roles for women.

My wife has pointed out to me that when she got out of school, she had a choice for a career outside the home among teacher, secretary, or nurse. Today, the opportunities are extensive and one sign is that women are marrying later and having children later. For example, the first one of my daughter’s friends did not marry until she was 30. Of course this trend has been allowed by the med-tech advances in available birth control.

A current sign that attitudes are changing, if too slowly for some, is the possible prospect that we are about to elect our first female president. Gender attitudes are so deeply ingrained that it is interesting to note that, personal qualifications aside, we even elected a black president before we could elect a female president.

Another factor in the wage-gender gap include the studied tendency for women to be less aggressive in negotiating salaries, raises, and promotions. Again, deeply ingrained attitudes about “appropriateness.” A large study out of Columbia showed that wage gap alone is responsible for much of the increased incidence of depression among women, compared to men. It was noted that when women’s income rose, depression incidence receded.

One more point is that women are still the primary housekeepers and child care parent, which leaves less time and energy to devote to job or career.

Another subtle and sensitive factor is that women, especially from more traditional backgrounds, have themselves learned to hold attitudes about their “place” that might be holding them back from achieving their full career and earning potential. A stretchy version of the “Stockholm Syndrome.”

These shifts across our economy and in medicine are likely to continue. Women now have full equality in numbers in medical schools (in my school, shame on them, there were exactly five women every year). In some specialties, particularly OB-GYN, the gender gap will completely disappear if only because there will be no more men in them! Stay tuned, this is going to get even more interesting.