The Psychology of Collecting 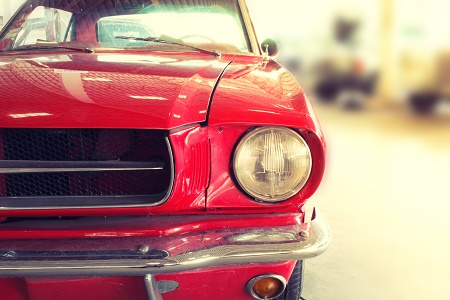 Though all collectors seek pleasure when they collect, there are differences in the motivators for each collector. This is because there are psychological reinforcers that feed into their pleasure center (nucleus accumbens) and spark their desire for collectibles. In fact, the possibilities of what these reinforcers are is so vast that only the most common can be covered here.

One contributing factor is the pride that is felt in acquiring exquisite objects. This can be further heightened by the pleasure of gathering them together as a group for the first time. During the search, excitement can be sharpened by finding a rare piece, which sets that collector apart from all others in his peer group. This may provide recognition and admiration by associates.

Other collectors, aside from the rareness of the piece, want to acquire it at a modest price. That is their joy and makes them feel self-important in being so astute. It is the object that is acquired for comparatively little money that titillates them and pumps them up to qualify for “bragging rights.” 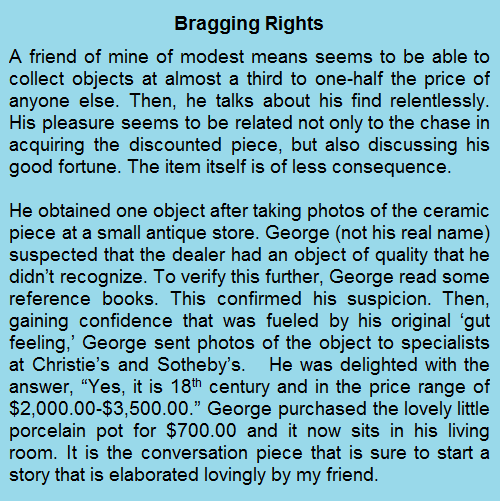 Different from bragging rights is the thrill of the chase. Here, the goal is finding the most desirable object, not the favorable price of the piece. In “The Cone Sisters of Baltimore: Collecting at Full Tilt” (Hirschland and Ramage, 2008), the authors talk about the siblings striving to outwit not only each other, but also dealers in their effort to find the best Rembrandt or Raphael.

Other collectors feel a sense of history when they assemble objects. By owning antiques, they feel closer to cherished bygone days or perhaps even dead ancestors or important people or circumstances of long ago.

The reverse of feeling a sense of history is looking into the future. This collector may hope to build a larger legacy for herself by passing on special objects to future generations.

Yet others collect because it is an intellectual process and provides intellectual satisfaction. The gathering of objects in a specific area requires discipline, knowledge and an eye for the unusual or particularly beautiful. This may have been the impetus for Stephen W. Bushnell, MD, who was physician to the British queen’s legation in Peking (now Beijing) at the end of the 19th century. He was a medical doctor in an outpost remote from other colleagues. Collecting Chinese porcelain, readily available in Peking, but a novelty in his home country of Britain, offered him intellectual stimulation. He put this to good use. Bushnell produced a number of books about his hobby, really an avocation. In many ways, it must have been his passion. His books were not only popular in his day, but are still read. These pursuits turned out to be beneficial to Bushnell’s nation in terms of introducing serious Chinese scholarship through the eyes of a contemporary Englishman. They were also, no doubt, advantageous to Bushnell who was able to benefit initially from intellectual stimulation and later the social recognition that was generated when his works were published.

It has also been said that some collectors gather objects to enhance their social lives. My guess is that their love of objects came first. Then, somewhere along the way, they realized that there are organizations for collectors like themselves. Friendships forged through these vehicles no doubt expand their social lives. Additionally, the “wow” factor of a friend or neighbor who visits a collector’s home and admires the cherished pieces is worth a great deal to almost anyone.

Others enjoy the arranging and rearranging of a collection. Though this may serve as a means of control, it could simply be the demonstration of organizational skills applied to collecting as taste and knowledge accumulates.

Last, and certainly not least, is that all of these reinforcers to collect involve anticipation. In its nascent stage, as yet unactuated, the collector’s desire allows her or him to imagine anything she or he wants to about the desired returns the object will bring. It is in this hopeful phase that the pleasure center burns most brightly. When magnetic resonance imaging is performed the nucleus accumbens erupts with activity when a reward is anticipated (Kuhnen, C. and Knutson, B., 2005). Once the prize is actually obtained, the nucleus accumbens shows less activity. The anticipation of the reward is more exciting to our pleasure center than having it. This might explain, in part, why collecting often transcends a mere pastime and becomes a passion. It gives sufficient pleasure that the participant wants to pursue it more and more vigorously.

Parts of the above are taken from Shirley M. Mueller, “The Neuropsychology of the Collector,” in Collectible Investments for the High Net Worth Investor. Editor: Steven Satchell, Academic Press, 2009.

For More:
Why We Collect
The Delay That Satisfies: How to Be Happy by Not Buying Things You Don't Need
Why People Buy What They Know They Won't Use
The Fine Line between Collecting and Hoarding

You May Also be Interested in
Most Popular
Looking for Links Between Testosterone and Vitamin D Levels
Top 10 Painkillers in the US
Dialysis Most Effective Treatment for Frail Patients with ESKD
Multiple Sclerosis Palliative Care Soars in US Hospitals
Do EMRs Provide Clinically Relevant Information?