Why Are EMRs So Terrible? 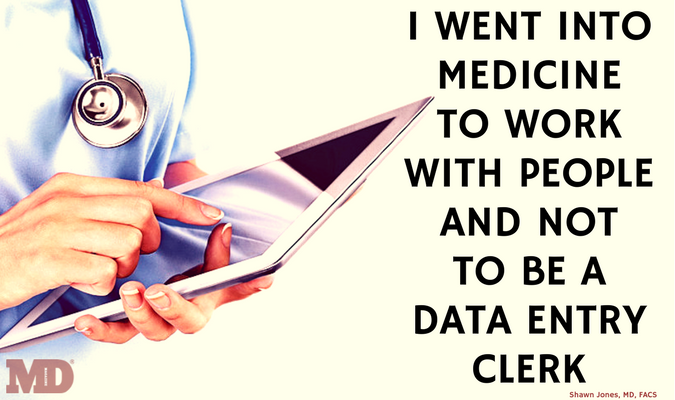 The answer came as no surprise. “The vote was 75 to zero,” Prunskis told MD Magazine. Not a single member of his staff could throw their support behind the EMR.

Across nearly every health care specialty, EMRs are a known source of frustration, stress and burnout for physicians. A July 2017 assessment of 1752 practicing family physicians found that 44.6% (782) believed they spend an excessive or moderately high amount of time working on EMRs at home. A cohort study of 27 ophthalmologists from November reported that a mean of 27% of an ophthalmologist’s time with a patient is spent on EMR use—equating to nearly 4 hours per day. An observational study from September stated that ambulatory clinicians who multitasked between EMR entries and conversation with patients were more susceptible to clinical errors.

Prunskis’ unofficial survey corroborates the evidence from several studies on the topic. When taken together, they paint a disconcerting picture: Many of the world’s leading scientific minds agree that an archaic form of hand-written notes is more efficacious than a technology whose primary purpose is to be easier than the system it’s replacing.

“Its taking a toll and driving burnout of physicians in the United States,” Prunskis said.

The potential that drives EMR practice is also a major source of its problems: voluminous data logged for every patient visit and procedure. Shawn Jones, MD, FACS, president of the Kentucky Foundation for Medical Care, told MD Magazine that, in a perfect world, the repository of EMR data would lead to groundbreaking research.

“But the problem is we have been doing it for more than 10 years and we haven’t had those results,” Jones said.

That’s not to say EMRs haven’t yielded mountains of data that's ripe for the picking. Just last week, while combing EMR data from 4 million-plus obese adults logged over 10 health systems, Kaiser Permanente’s research arm uncovered previously unknown racial and ethnic disparities in hypertension diagnoses. The data is there, and its story is waiting to be told. But the question remains: Is there enough evidence to support the day-to-day use of EMRs?

Researchers noted the primary purpose of EMR implementation was to improve the patient billing process, but acknowledged that the increased documentation requirements of such systems have unintended clinical consequences.

“Accurate documentation and billing is easily obtainable with EMRs, but improving recognition of clinical problems and changing provider practice is much more challenging,” researchers wrote.

When it comes to using EMRs to assess patients and cases, Prunskis likened the experience to looking for a stop sign while driving and finding it surrounded by another 50 signs. 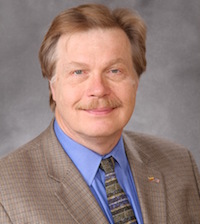 
“There might be 8, 9 pages or more on something you could categorize in 2 or 3 pages,” Prunskis said. “It’s numbing, mind numbing. It’s ream after ream of popup screens and running data.”

Even Jones, a self-described “tech-savvy” doctor, finds the utility of a computer is wasted on current EMR systems. Jones is still capable of pulling up written patient notes from the 16 years he practiced before the implementation of EMRs, and understanding the full picture—the patient’s condition, the strategy of care, and his own ideas on the situation.

Even better, he knows another doctor could get the same picture from those notes too.

“But now I get a 14-page note, and if you don’t know what I did, you’d have to really dive through 14 pages to find what should be an easy evaluation,” Jones said. “We’re creating mountains of data that make more noise than pertinent fact.”

Laborious note-taking also eats into the physician-patient relationship—a dynamic that’s strained by other factors, like a waning physician workforce and the waxing prevalence of telemedicine.

Prunskis found the introduction of EMR was a source of stress for patients, who were often curious and skeptical of the information their health care providers were jotting down. Was their personal health information accessible to a global network? Why is that necessary? What does it mean? Along with his colleagues, Prunskis found success reading notes aloud to patients, which helped alleviate most of their concerns.

When he returned to old fashioned note-taking, he got more efficient physician-patient interactions, and quicker visitations, he said. 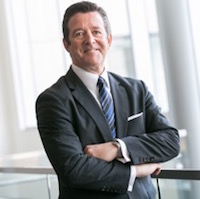 When Jones and his team are in the operating room attending to an urgent situation, he said he often finds himself refocusing the attention of nurses and midlevel providers, who are so busy entering data into EMRs that they forget about their duties to the patient and team. It’s a situation he’s been forced to adapt to—the team has no choice but to reserve some concentration at any time to EMRs. To acclimate, he took a class on his hospital’s EMR program to identify more efficient pathways to navigating the system.

“I think the computer is a great tool, but I went into medicine to work with people and not to be a data entry clerk,” Jones said.

For all the ridicule they’ve received from doctors, Prunskis said there is a group of professionals who have embraced EMR: plaintiff attorneys. In the era of electronic logging, physicians’ legal fears are gradually shifting from medical malpractice to incriminating EMR errors.

What’s worse is that some have expressed uncertainty as to when they may be causing an error, or when it’s their fault, versus the EMR’s. Jones’ habit of making preliminary notes on patients’ basic information recently caused a scare due to his EMR system.

“I got a phone call a few weeks ago, where someone wanted to know about my notations and said my date’s time stamps implied I’m doing notes before the procedure even occurs,” Jones said. “It was actually a computer problem, but it looked like I was pre-describing my operations.”

Jones has since wondered how many times such an issue is found following a procedure gone wrong—at a time when such an error would be considered indefensible. He also wonders what other unknown errors EMRs could make.

Going to the Source

As it stands, physicians are the ones identifying and trying to shore up the shortfalls EMRs bring about. It’s yet another time-suck on their busy schedules, Prunskis said. He argued that the hospitals, institutions, and government entities that require EMR systems to be implemented should also be the ones providing solutions.

“If this system was so good, then tell me, when was the last time the government paid you to do something?” Prunskis said. “It’s impressive, the lobbying efforts of the EMR companies, to ram this flawed system onto the American healthcare community.”

Prunskis has done his part in reporting issues to the source. Last December, he was invited to the White House, along with other physicians and health care leaders, to discuss current issues in the US healthcare system. It was there that he caught the ear of a senior advisor to former President Barack Obama, who was among the chief architects of the Affordable Care Act.

When Prunskis told the advisor that EMRs were causing physicians to miss key clinical data because of input overload, it became clear that he was breaking news to the administration.

“The EMR issues were part of the plans they had early on,” Prunskis said. “Even 8 years later, the organizations had no idea of the negative effects of EMR.”

Now that federal entities are aware of the issues plaguing EMR, they’ve hit another roadblock— they can’t agree on who or what’s to blame. Rep. John Fleming, MD, (R-LA) deputy assistant secretary for the US Department of Health and Human Services’ (HHS) Office of the National Coordinator for Health Information Technology (ONC), told MD Magazine that 20-plus years’ worth of patient billing regulation have shaped a burdensome process for physicians that is peaking today. 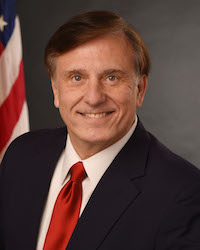 
“If these burdens were growing all the time, even before the widespread adoption of EMRs,  and if we were to suddenly stop using EMRs, the burdens would be there just as much–maybe even more,” Fleming said.

The Centers for Medicare & Medicaid Services’ (CMS) 1995 and 1997 updates to documentation guidelines for evaluation and management, which have been widely adopted by third-party payers as the standard for proper patient documentation, play a major role in most physicians’ stress from excessive note-taking, Fleming said. He pointed to other elements of modern documentation standards, such as required preauthorization and precertification via paperwork for supplemental tests and evaluations that only add to that burden.

On top of system difficulties leading to physician stress, patients and consumers may eventually bear the burden of cost from health care facilities’ expenses on information technology, Fleming said.

“If you assume more than 50% of time is spent on administrative work and doesn’t require a license to do it, that accounts for a huge amount of pent-up activity, and that’s very inefficient for the system,” Fleming said. “It’s no wonder the costs for health care have gone up how they have.”

The ONC is taking proactive measures to keep the system efficient and affordable. With representatives from the CMS, the organization is hosting a public meeting focused on clinician burden, featuring open discussion on documentation requirements and EMR. Fleming believes improvement needs to be made on 3 levels: Fleming noted that it’s crucial for the discussion to set a good precedent for action because private insurers often follow the guideline directive of CMS.

“It’s important for us to innovate,” he said.

It’s hard for the public to grasp physician pushback on EMR, Prunskis said, because they assume that new tech makes life easier.

Prunskis understands their confusion. For all the headaches EMR gave him before he went cold turkey, he could see how an improved system could eventually benefit physicians. His long-term vision includes the removal of popups, document layers, and unnecessary documentation for a chart logging system comprised of relevant patient information.

“It looks conceptually similar to somebody making their own airplane ticket reservation online, which is effortless,” Prunskis said.

Jones has noticed individual benefits in the era of EMR. Data operative notes have improved from their previous documentation system, and other elements of patient visits have been streamlined by EMR. But an optimal system would prioritize physicians’ issues, not payer’s preferences, when administrative changes are considered.

The ONC is keeping an eye out for both physicians and vendors in future rhetoric. Fleming preached patience while they and CMS work with the public to better understand the true problems of EMR, but patience has already run thin.

Related Coverage >>>
Running Away or Righting The Way: Is Psilocybin a Viable Psychiatric Treatment?
Improving Health Care, Conference by Conference
Sex, Society, and Acceptance in the Black HIV Community