Which Patients with Atopic Dermatitis Are Least Likely to Outgrow It? 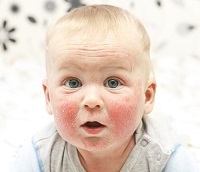 Some patients are more likely than others to have their childhood skin ailments last for decades.

A new meta-analysis identifies the initial duration of atopic dermatitis (AD), as well as age of onset and gender among factors associated with the disease persisting into adulthood.

The systematic review and meta-analysis from the Dermatology Foundation examining 45 studies of over 100,000 subjects was published by lead investigator Jonathan Silverberg,MD, PhD, MPH
Northwestern University Feinberg School of Medicine, Chicago, IL and colleagues in the October issue of the Journal of the American Academy of Dermatology.

While it is generally held that most children with atopic dermatitis will grow out of having the disease, the researchers indicate, "much of the data to support this notion originate from smaller studies, and did not account for a number of clinical factors that might modify disease persistence."

Noting recent studies which have suggested that AD may persist more commonly than previously recognized, Silverberg and colleagues undertook the review and meta-analysis to determine rates of disease persistence over time and to identify the clinical factors that may help to predict persistence.

Only three studies had data on persistence relative to severity, and these indicated that there was greater risk for persistence with more severe disease at diagnosis.  Six studies considered, and found no relation between persistence of AD and sensitivity to allergens, as reflected in skin-prick testing and/or antigen-specific IgE.

Silverberg and colleagues note that while they found disease severity, older age of onset, and female gender as risk factors for persistent AD, they also determined that 80 percent of childhood AD did not persist beyond 8 years, and less than 5 percent persisted 20 years after diagnosis.

Childhood Atopic Dermatitis does not Commonly Continue to Adulthood