Weight Gain a Bad Sign for Women with MS 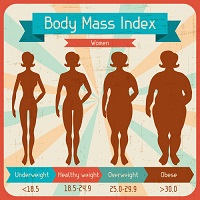 For women with multiple sclerosis (MS ) a higher body mass index appears to be linked to increased disease severity, a recent study found. That is not the case for men.

The study, conducted by Riley Bove, MD, of the Partners Multiple Sclerosis Center, Department of Neurology, Brigham and Women’s Hospital in Brookline, MA, and colleagues, was published in the journal Multiple Sclerosis and Related Disorders on May 31, 2016.

The researchers say they set out “to investigate the relationship between MS and BMI in a well-characterized prospective cohort.”

There were two primary questions they wanted to answer: what kinds of longitudinal changes in BMI occurred after MS onset and what is the relationship between disease severity and BMI?

The researchers found that, although a majority of MS patients had BMIs that placed them within the overweight or obese categories within the first 2 years of initial symptoms, their BMIs did not appear to increase with age, unlike healthy controls. The authors report, “In fact, MS subjects did not show an age-related increase in BMI as would be expected in the general population, and manifested only very small longitudinal increase in BMI.”

The researchers say that “more detailed measures, such as body composition, inflammatory and endocrine markers, insulin resistance, adipokines, and vitamin D, and activity should be measured in MS patients” in order to investigate the reasons behind the findings of this study, due to the fact that BMI provides only crude estimates of measures.