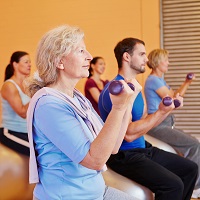 While many older adults struggle with exercise, a physical activity regimen along with vitamin D supplementation could be beneficial.

A team, led by Neide AP Nascimento, division of geriatric and gerontology at the Federal University of São Paulo in Brazil, analyzed the data from 345 geriatric women at least 60 years old who regularly exercise at the Social Service of Commerce Santana, Community Center in order to learn the effect of 25(OH)D supplementation along with physical exercise in an interventional study.

There is substantial evidence that serum 25(OH)D concentrations greater than 25-30 nmol/L should be avoided for all age groups.

In general, a 25(OH)D level of less than 20 ng/mL has been associated with neuromuscular performance issues in elderly people including poor physical performance, low muscular strength, and muscle weakness, suggesting that vitamin D supplementation is beneficial for geriatric adults.

A vitamin D deficiency is linked to proximal myopathy observed by the atrophy of type II muscle fibers, which can have a negative effect on neuromuscular performance and can contribute to osteopenia and osteoporosis by increasing parathyroid hormone (PTH) concentrations and bone turnover.

Physical exercises are highly effective in slowing down muscle wasting and the loss of function, but elderly patients find it difficult to exercise enough to prevent these changes. There has not been a previous study analyzing the relationship between 25(OH)D supplementation, different modalities of physical exercise, and its neuromuscular effects.

The study included 146 geriatric women in an aquatic training program, 99 elderly women in a multifunctional fitness program, and 100 community-dwelling elderly women who had not been exercising for the last year as a control group.

The participants were asked to discontinue the use of vitamin D supplements 2 months prior to the initiation of the supplementation protocol of the study.

Each group was administered 1 cholecalciferol bottle if the participant had 25(OH)D levels below the median level. They were also instructed to consume 21,000 IU per week—4 drops per week—of cholecalciferol for 12 months.

The investigators also administered a series of physical tests for the participants, including a timed up-and-go (TUG)test, a 2-min step (2-MST), a 30-second chair stand (CS), functional reach (FRT), unipedal balance test with visual control (UB), and a portable dynamometer for the strength of hip flexors (HS).  They also measured the serum 25(OH)D and intact parathyroid hormone levels at the beginning and conclusion of the 12-month study.

They compared the treatments using a general linear model for repeated measures (P <.005).

The study, “Effect of Vitamin D Level and Physical Exercise on the Physical Performance and Functional Test Results in Elderly Women,” was published online in the Journal of Geriatric Medicine and Gerontology.

Click here to sign up for more HCPLive® content and updates.
Related Coverage >>>
FDA Approves Tau Imaging Agent for Alzheimer Disease
FDA Approves Minocycline Topical Foam for Rosacea
Jelena Kunovac, MD: Aripiprazole Lauroxil to Treat Schizophrenia
You May Also be Interested in
Most Popular
Nearly 40% of Adults Suffer From a Functional Gastrointestinal Disorder
When to Suspect Diarrhea is Symptom of a Clostridium Difficile
Biomarkers Predict Problems Associated With Traumatic Brain Injury
Liver Inflammation Lingers in Some Patients After Hepatitis C Is Eradicated
Top 10 Painkillers in the US