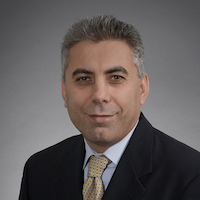 Ali Mokdad, PhD
Though the overall death rate per persons in the United States has declined by more than 22% since 1990, new drivers of death have emerged over that time and have continued to unequally affect residents at the state level.

A new systematic analysis has put together estimates on the trends of disease and conditions in the US, and how it has affected residents of each state. The results, from the Global Burden of Disease Study (GBD), show the country’s health burdens have vastly changed from 1990-2016 — in ways that call for similar changes to policies and medical priority.

The GBD study is a comprehensive project that is quantifying intenrnational health metrics by covering 333 diseases and injuries and 84 risk factors. It is, by their standard, the most comprehensive state-by-state health assessment ever initiated, and estimates disease prevalence and incidence, death, life expectancy, and several other metrics for all 50 states, the District of Columbia, and the nation overall.

Collaborators from the US Burden of Disease reported that overall death rates in the US have declined from 745.2 (95% UI; 740.6-749.8) per 100,000 persons in 1990, to 578 (95% UI; 569.4-587.1) per 100,000 persons in 2016. With the decrease in mortality comes a change in leading causes of death. While ischemic stroke and lung cancer remained the greatest leading causes of years of life lost (YLL) throughout the 26-year gap, conditions such as Alzheimer’s disease (AD), diabetes, self-harm, opioid use disorder (OUD), and chronic liver disease have become prominent contributors to YLL and mortality rates.

Among the top 25 conditions to result in US years lived with disability (YLDs) in patients, diabetes mellitus had the most significant jump from 1990-2016. The condition, which ranked as the eighth leading cause of YLD in 1990, ranked third in 2016 behind low back pain and major depressive disorder. It increased by 106% (95% UI; 92.9-119) in that span.

The greatest causes of disability-adjusted life-years (DALYs) in US residents also shuffled from 1990. COPD, Diabetes, AD, OUD ranked in the top 10 causes, while falls, non-firearm self-harm, and diabetes CKD each increased by at least 49 DALYs. HIV/AIDs, which had emerged as a public health crisis in the 1980s, dropped from the thirteenth-leading cause of DALYs in 1990, to 51st in 2016.

Indeed, the priorities of US health care have changed with the most pressing conditions over years. But the need for improved resources persist, study co-author Ali Mokdad, PhD, said.

“The US has witnessed some improvements among youth under 20 and seniors over 55, but overall the nation and some of our states are falling behind other, less developed countries,” Mokdad, a professor of Globabl Health at IHME, said. “The strain on America’s health resources is getting worse, and the need for prevention services and greater access to and quality of medical care is increasing.”

Researchers also pointed to tobacco consumption, high body mass index (BMI), poor diet, alcohol and drug use, high fasting plasma glucose, and high blood pressure as present issues in US health — each risk individually accounted for at least 5% of risk-attributable DALYs in 2016. Tobacco consumption (32), high BMI (10), or alcohol and drug use (8) comprised the entire list of top risk factors for attributable DALYs in the 50 states.

Mokdad told MD Magazine that it's difficult to prioritze the need for response among these rising issues — especially because the conditions vary in how they affect different ages, and the means by which they can be reduced.

"Some can be controlled by mitigating risk factors, such as diabetes," Mokdad said. "Opioids represent an epidemic in the US and, unless addressed, will continue to be a major factor, especially among young to middle age adults."

Study co-author Christopher Murray, MD, director of the Institute for Health Metrics and Evaluation (IHME) at the University of Washington, called on health care system leaders to collaborate on mitigating these risks — or suffer the consequences of premature American deaths.

“To an increasing degree, overweight, obesity, and sugary diets are driving up health care costs and are costing Americans years of healthy life,” Murray said in a statement. “They are undermining progress toward better health.”

In an accompanying essay to the study, Howard K. Koh, MD, MPH, and Anand K. Parekh, MD, MPH, noted the GBD’s 2016 documentation describes a nation that is aging and increasingly diverse in race, ethnicity, socioeconomic status, sexual orientation, and gender identity. As a result, they call on clinicians to guide patients through evidence-based disease prevention and early intervention methods — as well as policy makers to reconsider the “current dismal national stance toward disease prevention.”

Mokdad pointed to hopeful signs in the analysis: DALYs related to motor vehicle injuries have dropped significantly, as has those related to HIV, and major risks from 1990 like smoking, high blood pressure, and high cholesterol have declined over years. Of course, obesity, drug use, and high blood sugar have almost assumed their roles in 2016.

The study, "The State of US Health, 1990-2016: Burden of Diseases, Injuries, and Risk Factors Among US States," was published online in JAMA Tuesday morning.