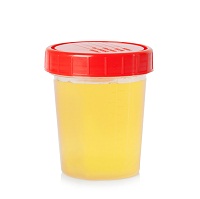 Researchers say they have developed a method to screen for hepatitis C using a urine test that is faster and cheaper than traditional blood tests.

The one-step test will screen, detect and confirm a hepatitis C virus (HCV) infection, according to a news release issued by University of California Irvine Health researchers. Blood-based testing for the virus requires two steps, can be expensive and inconvenient and are often are not readily available and affordable worldwide, the release states.

“Our novel HCV antigen test system has significantly improved sensitivity and specificity over current tests,” Dr. Ke-Qin Hu, professor of gastroenterology and hepatology at UC Irvine School of Medicine stated in the release. “Importantly, for the first time, we can use urine specimens for one-step screening and diagnosing of HCV infection. Finding a more convenient, easy-to-use and cost-effective screening alternative is imperative, because HCV is significantly under-screened and under-diagnosed.”

Hepatitis C is a bloodborne virus that if left unchecked can cause serious damage to the liver over time. Health authorities estimate that at least 150 million people worldwide are chronically infected with the virus and many may not know it because there often are no symptoms until sever liver damage develops.

The release noted that the current screening test, though specific and sensitive, is unable to tell the difference between active and previous infection. The process that is currently used requires one blood test that screens for virus-specific antibodies and if positive then a second polymerase chain reaction (PCR) test that identifies HCV RNA to determine whether the infection is active, according to the release.

Hu’s novel HCV antigen urine test could also help reduce costs, which could benefit developing countries that can’t afford to pay for the costly second part of the blood testing that detects RNA, he said.  The price for the urine test, if it receives regulatory approval, would likely be more in line with the cost of an antibody test, he said

“The ability to detect infection using urine rather than blood avoids needle stick and blood sample collection, greatly reduces the cost and necessary clinical infrastructure for screening and diagnosis, helping to promote widespread adoption of the test on a global scale,” Hu stated in the release.

In the past two years, new direct acting antiviral drugs with high cure rates have been approved in the US and several other countries.

“Those who are HCV infected can now be cured, before a further liver injury and complications develop, but only if they are diagnosed,” Hu said.

Hu recently presented research on the urine test at the American Association for the Study of Liver Diseases meeting in San Francisco.  So far, 128 urine samples were tested among two groups, with and without HCV, and the results were “100 percent in concordance” with the standard serum PCR test, Hu said.

The next step will be to work with government regulators to develop the urine test for clinical use.

Click here to sign up for more MD Magazine content and updates.
Related Coverage >>>
Miscarriage Associated with High Levels of Post-Traumatic Stress
JUUL Use Significantly Jumped Among Young US Adults Since 2018
Marijuana Use Prevalent Among Cardiovascular Disease Patients
You May Also be Interested in
Most Popular
Postpartum Depression Linked to Pediatric Dermatitis
The Clear Vision of Future Ophthalmology Care
FDA Approves Teprotumumab for Thyroid Eye Disease
Medical Marijuana Could Improve Sleep Quality for Chronic Pain Patients
Top 10 Painkillers in the US