Umbilical Cord Blood May Contain the Next Eczema Treatment 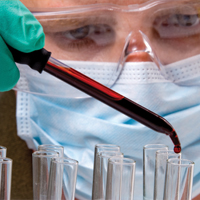 Although preclinical trials have shown that mesenchymal stem cells (MSCs) are therapeutically effective against atopic dermatitis, actual clinical studies had not yet confirmed it – until now.

MSCs are typically found in bone marrow, but it can be isolated from other locations such as the fallopian tube, fetal liver, fetal lung, and even from umbilical cord blood.

“This study is a first-in-class study demonstrating that adults with moderate-to-severe atopic dermatitis responded to a treatment of stem cells derived from umbilical cord blood,” senior author Tae-Yoon Kim, MD, PhD, from The Catholic University of Korea in South Korea, explained in a news release.

This discovery was made in two clinical trials consisting of 34 patients with moderate-to-severe eczema, as described in Stem Cells. The participants were split to either receive a low dose or high dose of the human umbilical cord blood-derived MSCs subcutaneously. Scores were measured based on the Eczema Area and Severity Index (EASI), Investigator’s Global Assessment (IGA), and Severity Scoring for Atopic Dermatitis (SCORAD). Outcomes were reported after one month for the first study and three months for the second.

“The single treatment of stem cells in patients resulted in the significant and persistent improvement in disease symptoms throughout the follow-up period of 12 weeks,” Kim continued.

For those who received high dose, 55% showed a 50% reduction in EASI score. In addition, these patients had a reduction in IGA (33%) and SCORAD (50%) scores.

None of the patients discontinued the study due to side effects and no serious adverse events occurred from the treatment.