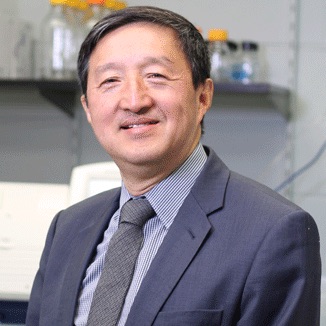 Shan Lu, MD, PhD
Researchers at the University of Massachusetts are launching a phase 1 trial to determine the safety of a potential vaccine for HIV.

The vaccine was developed by Shan Lu, MD, PhD, a professor of biochemistry and molecular pharmacology at UMass. The trial will be administered by the HIV Vaccine Trial Network (HVTN), which is sponsored by the National Institutes of Health.

Lu told MD Magazine his vaccine is different from most traditional vaccines because it is a DNA vaccine. Lu’s particular technique leverages limited DNA sequences from HIV, in order to spark a “priming” effect within the patient’s immune response. That initial priming is followed by a protein vaccine, matched to the proteins produced by the DNA, and administered alongside the adjuvant GLA-SE.

Lu said the priming/boosting technique is a novel approach. He said the DNA/protein vaccine combination dose has been tested, but only a few times. Lu said another distinguishing facet of his vaccine is the use of a polyvalent formulation.

“Most people don’t think a cocktail with limited numbers of HIV antigens will be able to cover the diversity and constantly mutated viruses, but our preclinical and phase 1 clinical trial data showed that it is possible to elicit quite broad antibody responses to cover the diversity of HIV-1 viruses,” he said. “Recent data from other HIV vaccine groups also have data to support such idea.”

Though the science behind the HIV vaccine is still emerging, Lu said he doesn’t anticipate any problems enrolling patients in the study.

“[HTVN] is well prepared for such trials so I don’t think the available volunteers should be an issue,” he said. “Furthermore, we did a similar trial at UMass Med School a few years ago and we were quite surprised to see the high numbers of volunteers.”

As a phase 1 study, the primary endpoint of the trial is simply to determine its safety. However, the study will also give researchers the chance to study the vaccine’s real-life effect on human immune response.

Lu, who has been working for 2 decades on fighting HIV through a vaccine, said being at the forefront of the unfolding scientific frontier of HIV prevention comes with significant pressure, but he said it’s also exciting.

“Of course I am excited, not because I think we have a vaccine now, but because we have overcome many hurdles (both technical and political) and been persistent in the last 20 years to keep making progress,” he said.

“Any true breakthrough in science or medicine has to be hard and (go) against the mainstream thinking,” he concluded. “But along the process, science is moving forward and ultimately some real progress will be made, whether by us or by someone who can learn from us.”

Click here to sign up for more HCPLive® content and updates.
Related Coverage >>>
Baloxavir Effective in Preventing Spread of Flu
Banafsheh Kashani, MD: Telemedicine for Women's Health During COVID-19
Most US Adults Have Not Received Recommended HIV Testing
You May Also be Interested in
Most Popular
Denise Daley, PhD: Early Asthma Interventions for Infants
Free Webinar, Derm Clinical Updates: Keeping Up with COVID-19
Non-Alcoholic Fatty Liver Disease Explains Chronic-Liver-Disease-Related Mortality
What Should I Do With This Abnormal ALT?
The 10 Worst Things Patients Can Say to Physicians