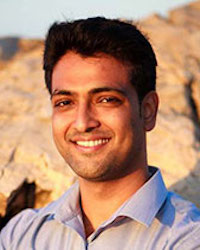 Parag Mahale, PhD
Treatment of hepatitis C virus (HCV) infection was associated with lower risk of some other conditions in the largest western study of the relationship between antiviral treatment and extrahepatic manifestations.

Parag Mahale, PhD, Infections and Immunoepidemiology Branch, Division of Cancer Epidemiology and Genetics, National Cancer Institute, Rockville, MD, and colleagues found that while some data have been available from Japan and Taiwan, there has not been a large-scale study of the US population.

"There have been no population-based studies that evaluated the risk of EHMs (extrahepatic manifestations) after SVR (sustained virologic response) in HCV-infected people in the USA," researchers wrote. "As some EHMs, such as mixed cryoglobulinaemia, PCT (porphyria cutanea tarda) and lichen planus are rare, the role of SVR in reducing the risk of these EHMs has not been evaluated."

The investigators conducted a retrospective cohort study with at least 1-year follow-up in over 160,000 individuals aged 20-85 years, including 31,143 who received interferon-based antiviral treatment for HCV between October 1999 and August 2009. The population was drawn from the Department of Veterans Affairs (VA) HCV Clinical Case Registry (HCV-CCR), comprising all known HCV-infected veterans who obtained care at any of the 128 VA medical facilities in the US.

Most EHMs rarely occurred, at rates of less than 1 per 1000 person years, except for glomerulonephritis, diabetes and stroke.  Mahale and colleagues found that, in general and with the exception of lichen planus, the incidence of EHM was lower in the treated group than in untreated veterans.  The lowest EHM incidence rates were among treated individuals who had attained SVR, except for coronary heart disease and stroke.

"We found that SVR reduces the risk of some HCV-associated EHMs, such as mixed cryoglobulinaemia, glomerulonephritis, PCT, NHL (non-Hodgkin's lymphoma), diabetes and stroke," researchers wrote. "These findings further strengthen the epidemiological evidence for their association with HCV infection."

The investigators found an increased risk for type 2 diabetes mellitus onset among treated individuals who did not attain SVR, which has also been found in another cohort study.

"This increase may be due to the effect of interferon and persistent viral replication,” researchers wrote. "Interferon therapy has been reported to induce type 1 diabetes; however, whether it can lead to type 2 diabetes is not known."

The risk of stroke was found to be statistically significantly reduced with HCV treatment whether or not SVR was attained. The investigators believe that interferon, rather than hepatitis treatment in general, was linked to the reduction.

"Our results may reflect the interferon therapy rather than SVR and need to be verified in HCV-infected patients who were treated with interferon-free regimens," researchers wrote.

In commentary accompanying the study, Salvatore Petta, MD, PhD, and Antonio Craxi, MD, Section of Gastroenterology and Hepatology, University of Palermo, Palermo, Italy, considered questions that remain due to study limitations. They noted that the study population of veterans was principally male, and that not only could interferon treatment have intrinsic  effects on EHMs, but that there could be a selection bias in patients eligible to receive it.

"Is the effect of SVR on cardiometabolic disorders driven by virological clearance, by IFN, by a population selection bias?" they asked in their commentary.

While current HCV treatment has largely moved from interferon-based regimens to the direct-acting antivirals (DAAs), and that the effect of attaining SVR on liver-related outcomes is clear, Petta and Craxi note that the evidence suggesting benefit on EHMs remains to be further elucidated.

"Before turning these results into clinical recommendations, data on DAA-based therapies and identification of clinical settings at higher or lower extrahepatic benefit of SVR should be provided," they wrote.

The study, "The effect of sustained virological response on the risk of extrahepatic manifestations of hepatitis C virus infection," was published online in Gut this month.

Click here to sign up for more HCPLive® content and updates.
Related Coverage >>>
Christina Tan, MD, MPH: Managing Coronavirus Fear
First Flu Strain Impacts Ability to Fight Virus for Life
Study Suggests Women Should Avoid Macrolides During First Trimester
You May Also be Interested in
Most Popular
The Fear of the Coronavirus, and the Reality of the Flu
Do EMRs Provide Clinically Relevant Information?
Top 10 Painkillers in the US
Testosterone Supplementation May Increase Serotonin Levels in the Brain
How to Spot a Bad Doctor