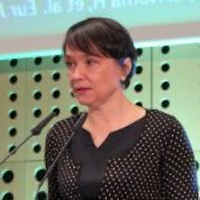 Polona Jaki Mekjavic, MD
According to the results of a recent study, a “treat and extend” regimen (TER) of anti-vascular endothelial growth factor (anti-VEGF) intravitreal injections in patients with neovascular age-related macular degeneration (nAMD) can help prevent serious and long-term loss of vision.

These regimens can also ensure the maintenance of visual acuity levels that can keep patients self-sufficient in real-world scenarios, such as driving, reading, and recognizing faces. Without that independence, patients have an increased risk of falling, depressive symptoms, and earlier admission to nursing homes.

The authors of the study, led by Polona Jaki Mekjavic, MD, an ophthalmologist and professor at the Eye Hospital University Medical Center at the University of Ljubljana, set out to examine the long-term efficacy of anti-VEGF treatment using TER in nAMD patients. They also wanted to identify the percentage of patients who experienced adequate visual acuity for independent functioning after treatment.

Their study was a retrospective, single-center evaluation of 101 nAMD patients treated using these methods over the course of 5 years. Participants consisted of 25 men and 76 women, ranging in age from 66 to 97 years. The study was conducted at the University Medical Center at the University of Ljubljana, in Slovenia.

Their best-corrected visual acuity (BVCA) was measured at baseline, using Early Treatment Diabetic Retinopathy Scale (ETDRS) letters, with baseline mean being 60.5 ±11.3. They were then measured once per year for the duration of the study. Study participants received monthly treatment injections of either ranibizumab (0.5 mg/0.05 mL) or bevacizumab (1.25 mg/0.05 mL). A third group of patients was treated with aflibercept (2 mg/0.05 mL), either because of a change in reimbursement policies or if the treating clinician noted a lack of treatment response.

Monthly injections continued until the patients exhibited no further signs of choroidal neovascularization (CNV), including hemorrhage or an increase in or persistence of intra-retinal or sub-retinal fluid. Presence of CNV was determined by examining the patients’ fundus and via SD-OCT imaging, and reported using ETDRS charts. If there was no CNV detected, the treatment interval was extended in 2-week intervals, up to 14 weeks. If CNV activity continued, the treatment interval was shortened by 2 weeks.

“The strength of our study is that it assessed long-term visual outcomes of anti-VEGF agents in a real-world setting,” the authors wrote. “All patients were treatment naïve, and all were treated with the TER regimen. They received treatment from clinical practice in a single eye center. This allowed us to have the same recommendations for starting treatment, the same method for measuring VA, and the same management criteria; however, this may limit the generalizability of the study findings.”

“The study demonstrates the success of the TER approach (maintaining continuous anti-VEGF therapy and adjusting injection intervals to the patients’ responses) in preventing severe visual loss due to nAMD,” the authors continued. “Our study confirmed that patients with better baseline VA preserved good vision after long-term treatment. Further studies are warranted to determine how to maximize the proportion of eyes that will maintain good VA in long-term treatment of nAMD with anti-VEGF.”

The full study, "Outcome of 5-Year Treatment of neovascular age-related Macular Degeneration With intravitreal anti-VegF Using “Treat and extend” regimen," was published in Frontiers in Medicine.