This Flu Season Is Bad, But It Doesn't Deserve the Hype

JANUARY 17, 2018
Kevin Kunzmann
@NotADoctorKevin
Most major news outlets might have you thinking this flu season is the beginning of the end of the world. We have good news! It’s not.

“The 2014-15 season was just as bad, if not worse,” Fauci told MD Magazine. “Though the perception has been ‘Wow, this is unprecedented,’ in no way is it unprecedented.”

Mainstream news sources began hyping the 2017-18 flu season after the Centers for Disease Control and Prevention (CDC) issued their most recent Weekly US Influenza Surveillance Report, showing that every US state except Hawaii and the District of Columbia had reached widespread influenza activity levels.

The report also indicated that pediatric laboratory-confirmed influenza hospitalizations had notably increased in recent weeks. An estimated 16 children aged 0 to 4 years old, per 100,000 population, were hospitalized due to the flu by January 6 — the greatest rate among age groups.

Though stories surrounding the current rates of infection and the virus’s wide geographical reach have (please excuse us) gone viral, health officials are not willing to call this more than what it is: a bad, but not superlatively bad flu season. 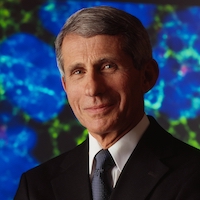 Anthony Fauci, MD
Fauci’s 2 comparative flu seasons (2014-15; 2012-13) both had similar rates of Influenza-Like Illness (ILI) Activity Levels to the season we’re working through now, as indicated in the CDC’s weekly report. In each season, the percentage of outpatient visits for ILI reached a peak near the beginning of January.

Fauci noted that this flu season started earlier than most predicted, and began its acceleration of outbreaks earlier than what experts consider normal. He accredited its early severity and onset to 3 elements: the nature of the virus, the population’s background immunity, and the flu vaccine’s match.

89.9% of the flu cases reported to the CDC since October 1, 2017 come from the strain known as H3N2. It’s a mutation from the strain vaccine manufacturers predicted months before the season began, Fauci said, which explains the strain’s prominence and its poor vaccine match.

The H3N2 strain generally suggests there will be a severe season of infections, Richard Webby, PhD, a member of the St. Jude Children’s Research Hospital Department of Infectious Diseases, told MD Magazine. Webby drew a measured tone on the hype surrounding the H3N2 spread.

“It has been a relatively severe flu season, but nothing out of the ordinary. Some past seasons are very comparable. Unfortunately, plenty of activity is going around, but it’s nothing we haven’t seen in the past,” Webby said.

That said, both Webby and Fauci advocated for continued administration of the flu vaccine. Webby suggested the worst stages of the season may still be coming.

“Sometimes it’s followed up by a sudden outbreak of the other virus, Influenza B,” Webby said. “It could be another mini-peak of the season. Unfortunately, there’s no silver bullet to protect yourself from H3N2.”

Though the vaccine may not be as effective as in previous seasons, Fauci said it could still provide “a degree of efficacy” for those who get it. He also advocated for the prescribed use of antiviral oseltamivir (Tamiflu), in the right circumstances.

Webby noted that oseltamivir and other antiviral drugs only have efficacy against influenza during the early stages of infection. Children showing any typical symptoms of the flu should be immediately checked by a doctor, if not just for the chance of early, effective therapy, he said.

Fauci added that those infected can limit outbreak by staying home during their recovery, and those not infected should practice good hygiene and avoid crowded public places.