The HIV Target That We're Not Talking About 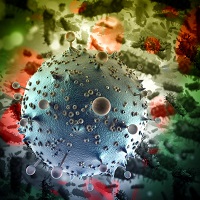 Researchers from the University of North Carolina (UNC) analyzed how the human immunodeficiency virus (HIV) attacks macrophages – a target that, up until now, was believed to have little to do with infection.

Macrophages are large, white blood cells in the liver, brain, and connective tissues all over the body. The cells ingest foreign material, such as CD4 T-cells that are infected with HIV. Previous studies looking at this area concluded that this is how macrophages also become infected. However, this belief is challenged by the new study conducted by UNC experts. One of the researchers, Jenna Bone Honeycutt, PhD, spoke with MD Magazine about the study and explained how this changes the way we thought we knew HIV.

Honeycutt explained that it’s been known that HIV can be present in macrophages in the 1980’s, but it didn’t become of particular interest until 2014. Two studies, one in monkeys and one in human culture of cells, began uncovering what materials were necessary to aid in the HIV replication process. This is where talk of macrophages, T-cells, and infection really began to take off. In the latest research, the team from the Division of Infectious Diseases at UNC used humanized myeloid-only mouse models. Through their work, they were able to demonstrate that HIV continues to replicate in macrophages even without T-cells and those macrophages are distributed in various tissues. In addition, macrophages can establish infection in new hosts, as described in The Journal of Clinical Investigation.

“The biggest takeaway with all of this was that macrophages in the tissues represent a viable source of viral production, and this was in the complete absence of T-cells,” Honeycutt explained. “So what we’re showing is that macrophages are a genuine and bona fide target for HIV replication in vivo.”