The Crucial Link Between Drug Policy and HIV Rates 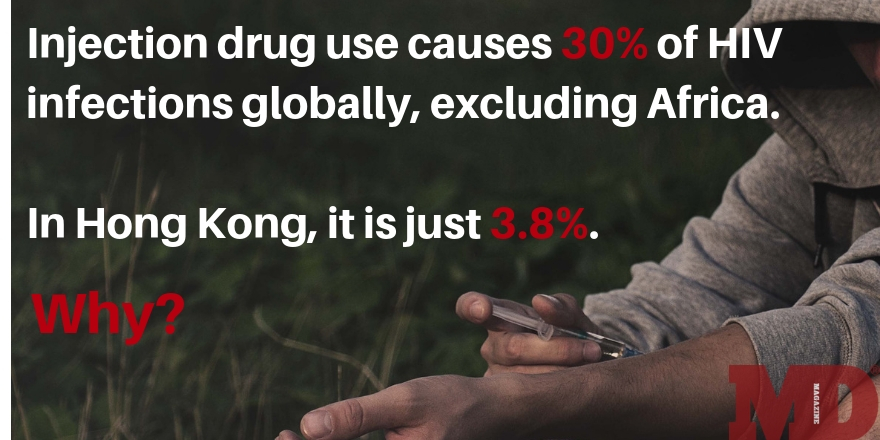 The number of opioid treatment programs (OPTs) in the US didn’t change much in the early 2000s.

There were between 1100 and 1200 OPTs operating at any given time from 2003-2012, according to the federal Substance Abuse and Mental Health Services Administration (SAMHSA). The administration certifies these centers, which then offer opioid addiction services such as methadone maintenance therapy.

However, as the opioid addiction epidemic expanded in its current titanic form, the number of OPTs began to spike. As of the end of August, there are now 1,608 OPTs in the US. The number of people receiving methadone treatment also ballooned to 384,000 last year, up from 220,000 in 2002.

As a result, lawmakers and politicians are now calling for additional treatment options for people who inject drugs (PWID), programs that would keep people out of prison and treat the addiction as a disease, rather than a crime. President Trump has called for expanded treatment and education programs to combat addiction and argued for stiffer penalties for drug companies and physicians if they promote opioid painkiller use irresponsibly.

Those changing attitudes toward drug use may have another related—but less discussed—consequence: the limited transmission of HIV among PWID.

Indeed, the evidence that a government’s posture toward drug use affects HIV rates is compelling, and there are a number of case studies from around the world that suggest a therapy-first approach could significantly lower HIV transmission rates among PWID.

According to the World Health Organization, about 10% of HIV infections globally come as a result of injection drug use. Excluding Africa, that number soars to 30%. But in Hong Kong, the percentage is just a fraction of that. Since the first cases of HIV were reported in Hong Kong in the mid-80s, just 3.8% of new HIV infections have been the result of injection drug use. That rate has even been on the decline in recent years, following an increase in the mid 2000s, according to the Hong Kong Department of Health.

Hong Kong’s successful HIV-prevention efforts extend beyond PWID; the Chinese special administrative district has had regionally low HIV rates for a number of years. But as investigator Shui-Shan Lee, MBBS, MD, told MD Magazine®, one of Hong Kong’s most successful HIV-prevention efforts wasn’t even designed with that purpose in mind. “Methadone treatment was set up over 40 years ago, long before the world witnessed the emergence of the HIV epidemic,” Lee said.

Rather than HIV prevention, methadone came to Hong Kong as an initiative of a “forward-thinking” commissioner of narcotics, Lee said—a decision based on the research of the late methadone clinic pioneer and advocate Robert Newman, MD, MPH.

As Lee recounted in a 2005 paper, a shortage of heroin in Hong Kong in the 1970s led the price to spike and caused many users to switch to injecting the drug—a much riskier way to consume it. Alarmed, local officials set up what would eventually be 20 methadone clinics, where drug users could pay a nominal fee to access methadone and ingest it in the presence of medical professionals. In the first 5 years after expanding the methadone program, Lee reported that the number of drug users sentenced to prison in Hong Kong dropped by 70%.

Not only did the system achieve its primary endpoint—curbing dangerous behavior sparked by the heroin price spike—the clinics eventually proved to be a major contributing factor in the district’s low HIV rate once the virus arrived a decade later. That’s because, in addition to exposing PWID to the risk of HIV transmission via needle, drug addiction also leads to an increase in risky behavior, such as unprotected sex. Treating PWID, therefore, indirectly affects a number of HIV transmission avenues.

Asked if anything had changed with regard to Hong Kong’s approach or success in recent years, Lee said no. And yet, despite the program’s success, one thing has changed. “It is now hard to set up a new clinic today,” Lee said.

Lee said it’s a case of NIMBY— the “not in my backyard” attitude of residents who don’t like the idea of a treatment center for drug users being located in their neighborhood. Therein lies the problem.

Despite the success of Hong Kong’s methadone program, it took many years for the Chinese government to agree to expand the clinics to the rest of mainland China. When they finally did, in 2004, the program proved successful, according to a paper Lee co-wrote with Newman last year.

“Perhaps the most important lessons of the experience both in Hong Kong and on the mainland,” the pair wrote, “are that significant numbers of opiate-dependent individuals want help, need help and respond well when treatment is made available and that the goal of ensuring prompt availability, affordability and acceptability of treatment services for opiate dependence is achievable.”

If the Hong Kong example makes the case that policy can help the problem of HIV among PWID, 2 recent studies highlight the ways in which policy can hurt, too.

A study published in The Lancet this July used computer modeling to analyze the impact of increased opioid usage on HIV prevalence in 2 regions: the Ural and Siberian federal districts in Russia. Opioid agonist therapy (OAT) is currently outlawed in Russia, and the availability of needle and syringe programs, as well as antiretroviral therapy, is limited.

If nothing changes, the model showed that the prevalence of HIV among PWID would jump from 30% to 36% in the city of Omsk in the next decade, and stay at the strikingly high rate of 60% in Ekaterinburg.

However, if OAT were made available to 50% of patients for 2 years, the model predicted that 35% of new HIV infections among PWID in Omsk could be prevented, as could 19% of deaths among that population. In Ekaterinburg, the reductions would be 20% in HIV cases and 10% in deaths.

Adding needle and syringe programs to OAT would result in further reductions, the researchers found. “Without urgent intervention, modelling indicates that the burden of HIV among PWID in Russia will worsen, escalating in settings like Omsk and remaining endemically high in settings such as Ekaterinburg,” wrote Javier Cepeda, PhD, MPH, of the University of California San Diego, and colleagues.

ART availability is also a critical issue, but the authors believe it wouldn’t have the same impact as offering harm-reduction programs in tandem with increased ART. “[F]ailure to scale-up harm reduction and solely scaling up ART coverage would prevent fewer cases of HIV and fatal overdose than this combination intervention,” they wrote.

Meanwhile, in Mexico, lawmakers moved to depenalize possession of small amounts of drugs and favor treatment over incarceration for drug users. An August article in The Lancet Public Health attempted to quantify the HIV-related impacts of this change in approach. The investigators focused on PWID in Tijuana.

While the new approach could seemingly pave the way to better care for people addicted to drugs and theoretically a reduction in HIV transmission, those potential benefits have not been fully realized.

Annick Borquez, MSc, PhD, also of UCSD, said one reason is that HIV was not prioritized when the legal reforms were enacted.

“The main intention behind these reforms was to redistribute responsibilities and costs of prosecuting small scale trafficking from the federal to the state level,” she told MD Mag. “The public health angle was attractive, but no efforts were made to operationalize it.”

Even though the approach has changed at the federal level, its impact on the lives of PWID can vary widely from region to region and city to city.

“While in theory federal policies supersede municipal policies, the latter take precedence among police who are following the chain of command,” Borquez explained. “Removing people who use drugs from the streets remains the main strategy implemented by the police, leading to a pointless cycle of detention and release, which disrupts their lives and causes harm.”

Another problem is that while Mexico mandates treatment for repeat drug offenders after the third apprehension, that treatment is usually abstinence-based. Borquez called this an arbitrary, not medical, diagnosis that is especially problematic in a setting where drug treatment is not always evidence-based. Such practices lacking medical supervision can “open the doors to human right abuses,” she explained.

But if the incarceration reduction strategy were coupled with diversion of drug users to opioid agonist therapy, the reduction in new HIV cases among PWID would be 21%.

Expanding Programs in US

Still, challenges remain. A SAMHSA report from last August noted that buprenorphine treatment has spiked as the opioid epidemic has worsened. Back in 2003, 11% of OTP facilities offered buprenorphine therapy. By 2015, 58% offered the service.

SAMHSA’s Cathie E. Alderks, PhD, wrote that the data show there is high demand for safe and effective therapies for opioid addiction. “The introduction of extended-release, injectable naltrexone further increases the opportunities for those with opioid use disorder on their paths towards recovery,” she wrote.

Brian Dominguez, MPH, a spokesman for SAMHSA, said the agency is focused on providing access and treatment options to people struggling with addiction. He called Medication Assisted-Treatment “the gold standard of treatment for people with opioid use disorder.”

He also advocated for programs such as the federal Drug Abuse Treatment Act of 2000 waiver program, the Treatment Improvement Protocol 63, Addiction Technology Transfer Center Network, and the Providers' Clinical Support System for Medication Assisted Treatment, which have all made it easier for physicians and clinics to be approved to provide opioid addiction treatment.