Teens Are Twice as Likely to Smoke If They Have Asthma 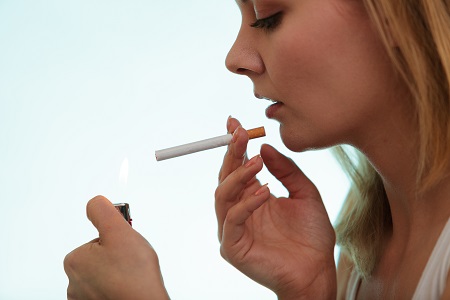 Smoking is bad for everyone’s lungs – but it’s especially bad for people with asthma. So you would think that someone with the lung condition would steer clear of activities which can trigger an attack. However, a new study found that teens are even more likely to smoke cigarettes if they have asthma.

“If you have asthma, it’s important that you avoid exposure to cigarette smoke of any kind. Smoking makes breathing much harder for kids with asthma,” Gailen Marshall, MD, PhD, said in a news release.

This didn’t appear to matter to teens though. For the study, which was presented at the American College of Allergy, Asthma, and Immunology (ACAAI) Annual Scientific Meeting in San Francisco, CA, researchers assessed more than 3,300 teens between the ages of 13 and 19. They were split into one of two groups, depending on if they had asthma or not, and filled out questionnaires.

“The study found 22% of the kids with asthma smoked, while only 12% of kids without asthma smoked,” said Bradley Chipps, MD, an allergist and asthma expert who was not involved in the study. The most common reason that any of the teens started smoking was “curiosity.”

It turns out that teens with asthma who began smoking before age 11 kept smoking because it helped with their anxiety and stress. The findings revealed that the teens with asthma had a 22% greater dependence on nicotine compared to those without asthma.

The teens said they knew smoking was addictive but continued doing it anyway. “Despite their knowledge that smoking is bad for their health, the adolescents with asthma didn’t consider smoking to be a problem,” Chipps explained.

Related Coverage:
Nutrition Matters When It Comes to Asthma Risk
How Did Researchers Miss Asthma Drug’s Potential?
Cigarettes Are More Likely to Kill HIV-Positive Smokers Than the Virus