Study Gets to the Nitty-Gritty of HIV, Tuberculosis Coinfection 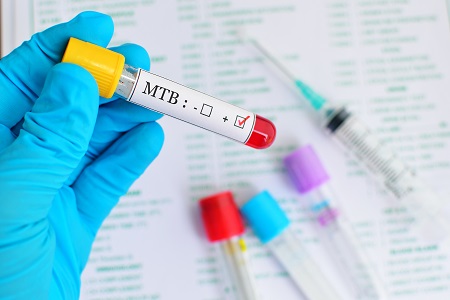 People infected with the human immunodeficiency virus (HIV) are more likely to get tuberculosis (TB) – but why? We know that HIV results in a compromised immune system, making patients more susceptible to other illnesses, but specific information about the connection between HIV and TB has been lacking.

“The risk of infection progressing to active TB is around 30 times higher for people who are HIV-positive. But the reason for this has not been known at the cellular level,” lead author Robert Blomgran, a research fellow of Medical Micro Biology, said in a news release.

When someone is exposed to TB, the immune defense typically encloses the bacteria with special scar tissue. When this happens, the infection is considered to be latent, but 10% of people with the latent infection will actually develop active TB.

The team learned more about the immune defense against TB by evaluating dendritic cells, a type of immune cell. These cells break down microorganisms, including the TB bacteria, and show them at the cell surface. Then other immune cells, particularly T-cells, bind to the bacteria fragments on the surface. At this point, the dendritic cells activate the T-cells to kill the TB.

Now the team knows that HIV increases Mtb potency by interfering with a central function of the immune system, as described in the report in The American Journal of Pathology.

Based on these findings, future treatments may need to focus on strengthening immune defense in these cells in what is called “host-directed therapy,” Blomgran concluded.

Related Coverage:
Much Needed HIV, Tuberculosis Test Development Is Underway
HIV, Tuberculosis Coinfection Should Be Treated Simultaneously
The Most Dominant HIV Subtype Is Also the Weakest

Click here to sign up for more MD Magazine content and updates.
Related Coverage >>>
Flu Cases Reach 13 Million in the US, CDC Reports
Investigators Link Farm Proximity Residence to C. Difficile
The 10 Most Read Articles of 2019
You May Also be Interested in
Most Popular
Top 10 Painkillers in the US
The Birth of a New Decade: Will We Finally Improve Maternal Care in the US?
Processed Meat Associated with Greater COPD Risk
HeartMate 3 Improves Patient Outcomes, Regardless of Transplant Eligibility
Overcoming Physician Burnout During the Winter