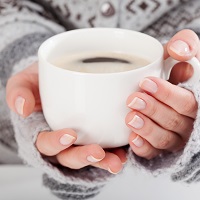 Caffeine levels in the blood may serve as an indicator for doctors diagnosing Parkinson’s disease (PD).

According to a study conducted by a team of researchers in Japan, studied patients with PD had significantly lower levels of caffeine in their blood than those without PD. The discovery backs previous research which has shown a link between caffeine and lower PD development risk, and reinforces researchers’ knowledge of how caffeine metabolizes in patients with PD.

The study analyzed 108 patients with PD for an approximate mean of 6 years, versus 31 people of the same age who did not have the disease. To set a control for caffeine intake, each group participant drank a mean equivalent to 2 cups of coffee per day.

Participants’ blood was tested for caffeine, as well as 11 byproducts made by the body as it metabolizes caffeine, and mutations in genes that can affect caffeine metabolism.

Patients with a more severe stage of PD did not report lower levels of caffeine in the blood, meaning the decrease may occur from the earliest stages of the disease. David G. Munoz, MD, of the University of Toronto in Canada, who wrote an essay accompanying the study, said in a statement that the discovery may give doctors a quicker step in PD diagnosis than previously known.

“If these results can be confirmed, they would point to an easy test for early diagnosis of Parkinson’s, possibly even before symptoms are appearing,” Munoz said. “This is important because Parkinson’s disease is difficult to diagnose, especially at the early stages.”

The rates are accurate enough to reliably diagnose PD in patients. The test reported an accuracy score of 0.98, with a 1 indicating every individual case was diagnosed correctly. Researchers concluded that caffeine and caffeine metabolite levels are promising biomarkers for PD.

“This is consistent with the neuroprotective effect of caffeine previously revealed by epidemiologic and experimental studies,” researchers wrote.

Munoz noted in his essay that “the protective effect of caffeine” against PD has largely been demonstrated in male patients, not female. For people who drink more than 4 cups of coffee per day, the decreased risk of PD is nearly five-fold, Munoz wrote.

“Decaffeinated coffee afforded no protection, pointing to caffeine rather than other substances in coffee or tea as the underlying pharmacologic agent,” Munoz wrote.

“Thus, exploring the mechanisms by which caffeine may protect against PD is a worthwhile endeavor,” Munoz wrote.

The study, "Serum caffeine and metabolites are reliable biomarkers of early Parkinson disease," was published online in Neurology this week.