Strokes are a Risk Factor for Vascular Cognitive Disorder 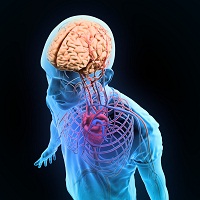 Strokes and transient ischemic attacks are risk factors for developing vascular cognitive disorder, according to findings published in Radiology.

About half of the patients demonstrated cognitive impairment based on the results of the MRI tests. From this, the researchers learned the differences between the carotid artery disease and the cognitive impairments lay in the amount of the brain’s white matter.

"We found that microscopic damage of main white matter tracts allowed us to distinguish patients with symptomatic carotid artery disease and cognitive impairment from those who were cognitively intact," said the study's senior author, Dorothee P. Auer, Ph.D. in a press release. "Our findings mean that a simple MRI test might improve the diagnostic work-up of people with suspected vascular cognitive disorder, and holds further promise to track progression of the disorder."

The researchers added that they believe subcortical disconnection is a key factor of vascular cognitive disorder, a sort of breakdown of the communication between the specific brain regions. Dr. Auer said the phenomenon was analogous to one of the main subway line stops causing traffic problems.

Click here to sign up for more HCPLive® content and updates.
Related Coverage >>>
Implementing Price Transparency Tools at Ambulatory Care Centers
Ustekinumab Successful as a Target Therapy for Crohn's Disease
Older Patients At Higher Risk of Complications from Flu
You May Also be Interested in
Most Popular
The Fear of the Coronavirus, and the Reality of the Flu
Top 10 Painkillers in the US
Implementing Price Transparency Tools at Ambulatory Care Centers
Telemedicine Valuable for Pregnant Women With Opioid Use Disorder
Depression Linked to All-Cause and Cardiovascular Mortality