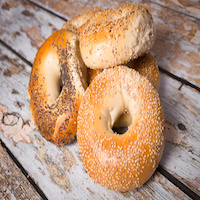 People who eat sugary, starchy foods potentially are at higher risk for lung cancer, even if they don’t smoke.

Researchers noted that foods with a high glycemic index – like bagels, white rice, melons, and pineapples – raise blood sugar levels and stimulate the production of insulin.

A team of researchers at MD Anderson Cancer Center, Houston, TX, assessed 1,905 patients who had recently been diagnosed with lung cancer and compared them to 2,415 people without cancer. The study patients were required to answer detailed questions about their eating habits, smoking, income, etc.

Findings published in the journal Cancer Epidemiology and Biomarkers showed that people who ate foods with a high glycemic index were approximately 50% more likely to be diagnosed with lung cancer than those who consumed the fewest high-glycemic foods.

According to the study, “non-smokers were more than twice as likely to have lung cancer if they reported eating a high-glycemic diet”.

Xifeng Wu, MD, study leader, said, “The results from this study suggest that, besides maintaining healthy lifestyles, reducing the consumption of foods and beverages with high glycemic index may serve as a means to lower the risk of lung cancer.”

“Previous studies have investigated the association between glycemic index, and the related measure glycemic load, and a variety of cancers including colorectal, stomach, pancreas, endometrial, ovarian, prostate, and thyroid, but these studies are limited and results have been largely inconclusive,” said the researchers.

Experts acknowledged further research is important to understand how diet and lifestyle can affect cancer.