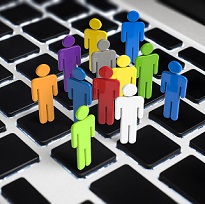 Social media often seems to be replacing face-to-face human interaction. Unlike established media run by a small number of censors and executives, social media reflects the thoughts of the people who use it. Many users only consume media, but a small number (7.5% according to one study) are so-called “super-users” who also produce copious amounts of content.

On a medical front, people may self-educate and seek support in others with similar diseases and disorders. This may be constructive (e.g., learning grounding techniques to help with anxiety) or harmful (e.g., pro-anorexia pages).

The investigators interviewed 18 to 30 year old individuals with diabetes or a common mental health disorder at cafes, participants' homes, and university buildings. Patients answered questions about their diagnoses and disease management, and were asked about examples of social media content related to their disorder.

Women are more likely to use social media as a healthcare information resource. Although diabetes and mental health diagnoses generate different information needs and self-management challenges, participants who had either diagnosis were equally likely to turn to social media for help.

Both sexes found support through social media, and all were concerned about their privacy on social media.

Patients diagnosed at younger ages expressed a greater sense of support (especially from family). People with little offline support were more likely to seek support online and be “super-users.” This indicates that for some patients who feel isolated or ostracized, social media sites may fill a void.

This study highlights the complex relationship users have with their social media. User demographics and strength of offline support predict how involved they will be with other users and whether or not they themselves will produce content.