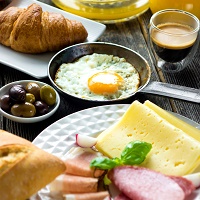 Skipping breakfast in the morning could increase a person’s risk of dying from cardiovascular disease by 87%.

Investigators found participants who never ate breakfast were 87% more likely to die from cardiovascular disease and stroke than those who ate breakfast every day, after accounting for demographic, socioeconomic, dietary, lifestyle factors, body mass index, and cardiovascular risk factors.

Using data from the National Health and Nutrition Examination Survey III (NHANES III), investigators to identify adults between the age of 40 and 75 to include in the study. Investigators only included participants who were free of a history of cardiovascular disease (CVD) and cancer at baseline and had mortality follow-up information including underlying cause of death.

Additionally, investigators excluded participants who were pregnant, who had missing information on frequency of breakfast consumption and who had daily total energy intake of more than 500 kcal or less than 5000 kcal. A total of 6,550 subjects were included in the study.

Investigators utilized the NHANES III Public-Use Linked Mortality File through Dec. 31, 2011 to determine participant’s mortality status. Follow-up of participants continued until death, with censoring at the time of death for those who died of causes other than CVD, or on December 31, 2011, for those who survived.

Investigators noted that those who never consumed breakfast were more likely to be non-Hispanic black, former smokers, heavy drinkers, unmarried, physically inactive, and with less family income, lower total energy intake, and poorer dietary quality, when compared with those who regularly ate breakfast.

Authors point to several different mechanisms that could explain the association between skipping breakfast with increased all-cause and cardiovascular mortality. They note that skipping breakfast might lead to overeating later and impairment in insulin sensitivity, is associated with stress-independent over activity in the hypothalamic-pituitary-adrenal axis because of a longer period of fasting, and may be a behavioral marker for unhealthy dietary and lifestyle habits.

Investigators noted several limitations within their study. They did not have information on what foods and beverages participants consumed for breakfast, they were unable to assess the effects of changes in breakfast eating habits during the follow-up on cardiovascular and all-cause mortality because information was only collected at the baseline, and, because they were using the NHANES III Linked Mortality File, they could not rule out the possibility of errors in classification of the cause of death.

This study, “Association of Skipping Breakfast With Cardiovascular and All-Cause Mortality,” is published in the Journal of the American College of Cardiology.