Should You Prescribe This Drug for Arthritis Pain Relief? 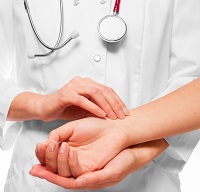 A medication commonly prescribed to relieve the painful symptoms of multiple types of arthritis has been found to be ineffective in treating pain associated with one particular form of the disease.

Hydroxychloroquine, sold under the brand names Plaquenil Sulfate and Quineprox, may not be any more effective in reducing discomfort than a placebo. While the drug has been shown to alleviate pain associated with rheumatoid arthritis and other conditions, a recent study demonstrated hydroxychloroquine has little or no analgesic effect with hand osteoarthritis (OA). Lead author Natalja M. Basoski, MD, and colleagues from Maasstad Ziekenhuis in the Netherlands presented the results at the European League Against Rheumatism Annual Congress (EULAR 2015).

“Current pharmacological treatment options of hand OA are limited as they have been shown to only work for short periods and are not effective for all patients,” the authors said in a news release.

A total of 202 patients with OA at least 40 years were enrolled from July 2010 to December 2013. Pain locations varied among patients and were pinpointed in the hands and feet (40%), just the hands (40%), and generalized (20%). They were randomly assigned to either take 400 mg of hydroxychloroquine per day or a placebo for 24 weeks.

“The findings from our trial do not support the prescription of hydroxychloroquine for patients with mild-moderate pain from hand osteoarthritis,” Basoski, of the Department of Rheumatology, said in the statement.

According to the results published in the Annals of Rheumatic Diseases, the 100 patients who received the prescription medication did not experience any overall relief when compared to the 102 who took the placebo. It was revealed that at the end of the study 50% of the patients had less pain by at least 20%, however, only 36% said they were better following the treatment. Any signs of potential long-term relief were quickly diminished.

OA is the most common type of arthritis and hydroxychloroquine has not been completely ruled out as a treatment for hand OA pain altogether. The outcomes suggested that the drug may not be effective at keeping overall pain at bay, but it did show signs of taming inflammation.

“However, further investigations will need to be performed to determine whether hydroxychloroquine relieves pain in other specific phenotypes of hand OA,” Basoski concluded.