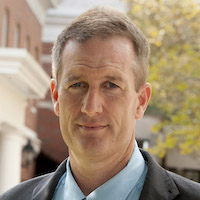 Timothy Heckman, PhD
According to new research, people in rural areas who are living with HIV have seen long-term relief from symptoms of depression when receiving therapy over the telephone.

The study builds upon earlier data that showed telephone-administered interpersonal psychotherapy (tele-IPT) reduced depression and interpersonal problems among people with HIV who live in rural areas over the course of 9 weekly sessions. The new study finds that the benefit persists at 4 and 8 months.

The importance of the study is evident because people in rural areas make up about 5–7% of people living with HIV (PLWH) in the US, but the population faces unique challenges.

Heckman told MD Magazine that while it seems clear rural HIV patients face higher rates of depression — they’re 1.3 times more likely to be diagnosed with depression than their urban counterparts — it’s not known exactly why it is. He posited it could simply be the accumulation of the extra stressors and barriers.

In any case, Heckman said public health officials and researchers have long sought ways to boost outreach to these patients.

“When we started studying rural AIDS in the mid-1990s, it became evident fairly quickly that rural PLWH confronted many geographic and psychological barriers that precluded them from receiving the mental health services they desired,” Heckman said. “So, we decided to take the treatments to them — in the safety and convenience of their homes.”

To study the question, Heckman and his colleagues followed 147 patients living in rural areas in 28 states. Participants got weekly phone therapy sessions from clinical psychologists over the course of 9 weeks, and self-reported their progress at the end of the sessions, and at 4 and 8 months after.

The researchers found that acute reductions in depressive symptoms achieved during the 9 weeks held firm through the 8-month mark, resulting in “medium-range” treatment effects. The study also found that patients who took advantage of tele-IPT were less likely to utilize emergency crisis hotlines.

Heckman said there hasn’t been a lot of research to say whether face-to-face therapy or videoconferenced therapy is better or worse than “faceless” methods like phone therapy, in which the 2 parties don’t see each other. However, he said there’s anecdotal evidence that the efficacy might depend on the individual.

“For example, we’ve worked with some clients who ask to see a picture of their tele-therapist,” Heckman said. “They just find it helpful to know what their therapist looks like. Conversely, some rural PLWH prefer the anonymity of the telephone.”

Heckman said some psychologists note that in-person patients sometimes take a while to get used to the clinic environment and overcome fears of losing their anonymity. On the other hand, patients on the phone often seem to dig right in, since they are in the comfort of their own homes and no one is looking at them.

While he can’t yet say empirically say whether tele-IPT is equal to or better than in-person therapy, Heckman said the new research shows tele-IPT is clearly worthwhile.

“If a rural PLWH enjoys face-to-face therapy and it’s accessible, then he or she should pursue it,” he said. “However, what we hope to show is that, if in-person therapy is not physically possible, or if confidentiality concerns precludes 1 from seeking in-person therapy, tele-therapy is an effective option.”

Click here to sign up for more HCPLive® content and updates.
Related Coverage >>>
How Will COVID-19 Change Pediatric Care?
Brian LaMoreaux, MD: Practicing Rheumatology During and After COVID-19
COVID-19 Lockdown Having an Impact on Adolescent Mental Health
You May Also be Interested in
Most Popular
Higher Doses of Upadacitinib Increase Rate of Serious Infections
Use of Oral Therapy for the Management of Schizophrenia
Psychosocial Treatments for the Management of Schizophrenia
Nanoparticle Treatment Showing Promise Against Rheumatoid Arthritis
Netakimab Rapidly Improves Axial Disease